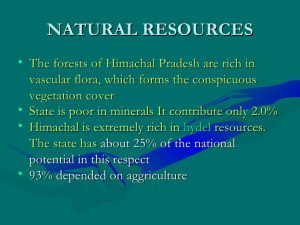 Natural resources are also classified based on their renewability:

Renewable natural resources: these are resources that can be replenished. Examples of renewable resources include sunlight, air, and wind . …

Biotic — Biotic resources are obtained from the living and organic material, such as forests and animals, and the materials that can be obtained from them. Fossil fuels such as coal and petroleum are examples.

Considering their stage of development, natural resources may be referred to in the following ways:

Mineral resource
Nature has endowed Himachal Pradesh with a number of important minerals such as, salt, gypsum, clays, mica, limestone, barytes, iron, pyrite and lead, however,  limestone and slate are of greater significance. The deposits of slate are found in Mandi, Kangra and Chamba district. Rock salt deposits are located in Mandi district at Gumma and Darang.

Gypsum is found in Sirmaur district. The limestone which is useful raw material for cement industry is found in abundance in Bilaspur, Sirmaur, Mandi and Solan district. In recent survey uranium deposits have been reported in Kullu and Hamirpur districts. Since a long time ONGC has been making efforts to locate combustible gas at Jawalamukhi (Kangra) and Deot Sidh (Hamirpur).

The state is richly endowed with a hilly terrain having an enormous volume of water from the catchment areas of Satluj, Beas, Ravi and Chenab rivers. As such, the state has enormous potential of water resources in the form of glaciers and rivers but ground water resources are limited.

Glaciers are located in higher Himalayan reaches (above 4000 m) in Pir Panjal, Dhauladhar, Zanskar and Great Himalayan ranges. There are 800 Glaciers in the Himachal Himalayas.

Most of the surface water resources of the state flow from perennial rivers which originate from glaciers. About 90% of Himachal Pradesh’s drainage forms the part of Indus river system. Himachal provides water to both the Indus and Ganges basins. The major river systems of the region are the Chandrabhaga or the Chenab, the Ravi, the Beas, the Sutlej and the Yamuna.

There are a number of small and large lakes in Himachal Pradesh. Most important of them are 21.

Among the Ramsar Wetlands are the following

The groundwater resources occur mainly in unconsolidated sediments of intermontain valleys and in the submontane tract. Kangra, Una, Hamirpur, Bilaspur, Mandi, Solan and Sirmaur districts, particularly their valley areas depend upon groundwater.

As much as 68% of the land area is covered with jungles. While the foothills and valleys are a refreshing green, the areas above the snow line are almost bare.The southernmost tracts are dominated by sal, sisham, chir, pine, dry deciduous and moist broad-leafed forests.  The temperate region above this grows oaks, deodar, blue pine, fir and spruce. The rhododendrons are seen along the hillsides around Shimla from March to May.

Himachal is the fruit bowl of the country with orchards found all over the place. Orchards bloom with wild flowers, but gladiolas, carnations, marigolds, roses, chrysanthemums, tulips, lilies and other flowers are carefully cultivated. The state government is trying to make Himachal the flower basket of the world.

From thick sub-tropical forests to the dry alpine vegetation, Himachal home to a wide variety of animals. This includes the leopard, which is the most widely distributed mammal in the entire state, the snow leopard, ghoral (goat-like stout animal), musk deer which is the state animal and monal (a pretty bird in nine iridescent colours), the state bird. HP has 11 major national parks and sanctuaries – the largest number in the Himalayan region. The Great Himalayan National Park in Kullu – the first in the state – was created to conserve the flora and fauna of the main Himalayan range, while the Pin Valley National Park to conserve the flora and fauna of the cold desert. At present there are 32 Sanctuaries, 2 National Parks and 3 Games Reserves.

The richness and diversity of our flora can be gauged from the fact that, out of total 45,000 species found in the country as many as 3,295 species (7.32%) are reported in the State. More than 95% of the species are endemic to Himachal Pradesh and characteristic of Western Himalayan flora, while about 5% (150 species) are exotic, introduced over the last 150 years.

Some of the common types of soil found in the state are Sedimentary, brown, as well as brownish-grey soils. These soils are found in the agriculture rich districts of Una, Solan, Bilaspur, Hamirpur, Shimla, Kullu and Kangra.

Soils in Una and hamirpur distt are low in Nitrogen, while Kangra, mandi Bilaspur, shimla are medium. Phosphorus status is low in kangra, una and shimla while it is medium in hamirpur, solan, kinnaur, kullu and mandi districts. Deficiency of Ca and Mg are common in acidic soil of Himachal Pradesh while Zn deficiency is found in 70% of soil.

Himachal Pradesh is extremely rich in its hydroelectricity resources. The state is having about twenty five percent of the national potential in this aspect. It has been estimated that about 27,436 MW of hydel power can be generated in the state by the construction of various hydel projects on the five perennial river basins no matter they are major, medium or small. Out of total hydel power potential of the state, 8,418 MW is harnessed so far, out of which only 7.6% is under the control of Himachal Pradesh Government while the rest being exploited by the Central Government.

Some imp hydel power station of state are as follows:

1.Girinagar Hydel Project- On river Giri of the Sirmour District

Beside these there are many small hydel power project located in the state.