Irrigation and Hydropower of Himachal Pradesh

Irrigation is the application of controlled amounts of water to plants at needed intervals. It helps grow agricultural crops, maintain landscapes, and revegetate disturbed soils in dry areas and during periods of inadequate rainfall.

India’s irrigation covered crop area was about 22.6 million hectares in 1951, and it increased to a potential of 90 mha at the end of 1995, inclusive of canals and groundwater wells. However, the potential irrigation relies of reliable supply of electricity for water pumps and maintenance, and the net irrigated land has been considerably short. According to 2001/2002 Agriculture census, only 58.1 million hectares of land was actually irrigated in India. The total arable land in India is 160 million hectares (395 million acres). According to the World Bank, only about 35% of total agricultural land in India was reliably irrigated in 2010.

To increase the crop production the importance of irrigation is well established. Adequate and timely supply of irrigation water to crops is the pre-requisite in the agriculture production process, particularly in areas where the rainfall is scanty and irregular. The supply of land is fixed, i.e. inelastic; therefore, the accelerated growth in production is possible through multiple cropping and realization of higher crop yield per unit area, which in turn depends upon irrigation. Creation of irrigation potential and its optimum utilization continues to receive a high priority in Government Planning.

During the year 2016-17, there is a physical target of 2,500 hectare area for CAD activities. Out of which 1,892.00 hectare area has been achieved up to December, 2016. Major Irrigation Project Shahnehar and MIP Sidhatha were included for funding under Command Area Development Water Management programme of Government of India and other project MIP Nadaun, Balh Vally (LB), Phinna Singh and 23 MIS are in pipe line for inclusion under the programme.

Hydro power development is the key engine to the economic growth of the State of Himachal Pradesh, as it makes a direct and significant contribution to economy in terms of revenue generation, employment opportunities and enhancing the quality of life. Himachal Pradesh is extremely rich in its hydroelectricity resources. The state is having about twenty five percent of the national potential in this aspect.

The State of Himachal Pradesh has an estimated Hydro power Potential of 27,436 MW out of which 24,000 MW has been assessed as harnessable while the Govt. of HP has decided to forgo balance potential in to safeguard the environment and to maintain ecology and protect various social concerns.

Situated on the river Giri ,Sirmaur district, Girinagar Hydel project has an installed capacity of 60MW, with 2 units of 30MW each. This project, which is run-off-the river scheme come 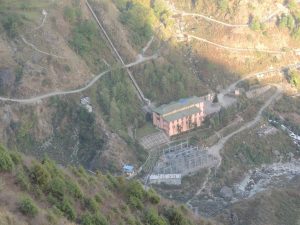 s under HPSEB and is operational for 29 years.

The project with an installed capacity of 16MW comprising 3 units each, is located near Baijnath in District Kangra..

Located in the Kinnaur district, on the river Bhaba is a completely underground project with an installed capacity of 120MW, comprising 3 units each of 40MW. The uniqueness of this project lies in its underground switchyard, a feature that no other hydel project in Asia has.

Bassi project(66MW) is an extension of Beas Power House in Mandi District constituting 4 units of 16.5MW each.

Larji hydroelectric project is on river Beas in Kullu district with an installed capacity of 126 MW. The project was completed in September 2007.

One of the major project on the satluj river is the Nathpa Jhakri Dam which generates nearly 1500MW of electricity. The project is funded by World Bank.