According to the FAO, a fishery is typically defined in terms of the “people involved, species or type of fish, area of water or seabed, method of fishing, class of boats, purpose of the activities or a combination of the these features”. Fisheries management, on the other hand, is the activity of protecting fishery resources so  that sustainable exploitation is possible, based on fisheries science, and including the precautionary principle.

Fisheries can be classified into following groups-

Fishing in India is a major industry in its coastal states, employing over 14 million people.

Fish production in India has increased more than tenfold since its independence in 1947. According to the Food and Agriculture Organization(FAO) of the United Nations, fish output in India doubled between 1990 and 2010.

The marine fish harvested in India consist of about 65 commercially important species. Pelagic and midwater species contributed about 52% of the total marine fish in 2004. India is a major supplier of fish in the world. In 2014-15 the country exported over 10,50,000 metric tonnes of fish, to some 75 countries, earning over $5.51 billion. Shrimps are one of the major varieties exported. The giant tiger prawn  is the dominant species chosen for aquaculture, followed by the Indian white prawn. 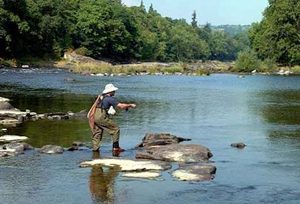 Status of Fishing of Himachal Pradesh

Himachal Pradesh  is  the States among a few in  India  which has been gifted by mother nature with rivers originating from glaciers which traverse through hilly terrains and finally enrich the semi- plain area of the state with their oxygen  rich water.

Beas, Satluj and Ravi receive many streams during their downward journey and harbour the precious cold water fish  such as Schizothorax, Golden Mahseer and exotic Trouts.

Cold water resources of the state have shown their potential with the successful completion of ambitious Indo-Norwegian Trout farming Project and tremendous interest shown by the hill populace for the adoption of evolved technology.

The commercially important fish species in Gobind Sagar and Pong Dam reservoirs, Chamera and Ranjeet Sagar Dam have become a tool for the upliftment of local population.  About 6,098 fishermen in the State depend directly on reservoir fisheries for their livelihood.

The reservoir of Himachal Pradesh has the distinction of highest per hectare fish production in Govind Sagar and highest sale price value of fish catch in Pong Dam in the country. During current year (upto December,2016), 13.06 tonne trout has been sold from the state farms and earning revenue to the tune  of  `86.64 lakh.

The Department of Fisheries has constructed carp as well as trout seed production farms in the state to cater the requirement of reservoirs rural Ponds and commercial farms in public as well as private sector. The value of Carp Farm seed production is 348.60 lakh in 2015-16 and `184.80 lakh in 2016-17 (up to December,2016).   Despite hilly terrain of the State aquaculture is being given due importance.  Under “Rastriya Krishi Vikas Yojna”

The Department of Fisheries has initiated many welfare schemes for the upliftment of fishermen. During recent year, a new scheme named “Backyard Fish Farming” (Kitchen Fish Ponds) has been started

A new scheme named mobile fish market vehicle has been launched in the state with 90 percent financial assistance from NFDB, Hyderabad with an aim to provide fresh fish to the people of Himachal Pradesh. Fishermen now are covered under insurance scheme where  `2.00 lakh is given (in case of death/ permanent disability) or `1.00 lakh (in case of parital disability) and `10,000 towards hospital expenses and even losses to their gear and crafts are being born by the State Government to the extent of 50 percent under “Risk Fund Scheme”.

A total number of 620 self employment opportunities were generated by the department under various schemes. Under Blue Revolution department has envisaged  construction of 1,000 hectare new ponds and 1,000 trout units in the State by 2020.  Central Sector Scheme of Blue Revolution is being shared in 80:20 between Central and State Government.

For the integrated development of reservoirs Gobind Sagar, Koldam and Pong Dam, four carp hatcheries are being established in private sector in Bilaspur, Una, Kangra and Sirmour districts by providing financial asistance `80.00 lakh during the year 2016-17.  Two Hi-Tech fish landing centres at Kasol and Barrel in Koldam Reservoir are being constructed. Apart from this, one ice plant is also being constructed at Dada Siba in Pong reservoir.

For the development of aquaculture in Himachal Pradesh, four Solar Power System are being established in Departmental Carp farms in Bilaspur, Mandi, Una and Solan districts.