Accountability means being answerable for the performance of tasks assigned to a person; if task assigned is selection of beneficiaries for a scheme, then accountability will imply whether the selection has been carried out by applying the criteria, and following the procedures laid down, in the timely manner within the budgets specified. Therefore, accountability requires the clear specification of tasks to be performed, the time frame and budget available for performing those tasks.

In addition, it is also important to be clear about the responsibility for performance of those tasks; who is responsible? Is it clear to them? Do they have the necessary capacities and resources to perform those tasks?

From the foregoing, it would become clear that accountability can only be determined if

Therefore, accountability in effective delivery of public services would have to take into account the above aspects. Take the case of supply of drinking water in a town; it is the responsibility of the municipality. However, it may not be clear as to what amount and frequency of water supply is considered as adequate or satisfactory performance of the task by the municipality. This is where ‘citizen charter’ become relevant; a charter then lays down a ‘service standard’; in this case, it may specify how many litres of water would be made available to each family in the town for how many hours per day? Would all households have a tapped water supply? 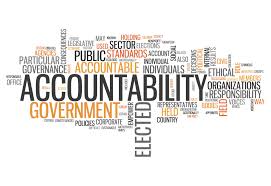 The citizen’s charter thus contains the service quality standards. It should also have a mechanism by which the charter is publicly communicated so that all citizens of that town know and understand what they can expect from the municipality in respect of water supply.

A companion component is the ‘citizens’ grievance redressal system’. If charter establishes the service quality standard, and if certain citizens do not get that quality of public service (drinking water in this case), then they should have a mechanism to send their grievance, and the municipality should have a mechanism to accept, work on and redress that grievance. The DAPRG has prepared a Handbook on the same.

Governance is admittedly the weak link in our quest for prosperity and equity. Elimination of corruption is not only a moral imperative but an economic necessity for a nation aspiring to catch up with the rest of the world. Improved governance in the form of non-expropriation, contract enforcement, and decrease in bureaucratic delays and corruption can raise the GDP growth rate significantly. The six perceived governance quality measures, each an aggregate of a number of sub-measures, are: voice and accountability; absence of political instability and violence; government effectiveness; reasonableness of the regulatory burden; the rule of law; and the absence of graft. Of these, the last two are the most directly significant in the context of ethical governance. ‘Rule of law’ measures whether crime is properly punished or not; enforceability of contracts; extent of black market; enforceable rights of property; extent of tax evasion; judiciary’s independence; ability of business and people to challenge government action in courts etc. ‘Absence of graft’ measures relative absence of corruption among government, political and bureaucratic officials; of bribes related to securing of permits and licences; of corruption in the judiciary; of corruption that scares off foreign investors.

There is a perception that the public services have remained largely exempt from the imposition of penalties due to the complicated procedures that have arisen out of the Constitutional guarantee against arbitrary and vindictive action. Those Constitutional safeguards have in practice shielded the guilty against the swift and certain punishment for abuse of public office for private gain. A major corollary has been the erosion of accountability. The huge body of jurisprudential precedents has crowded out the real intent of Article 311, and created a heap of roadblocks in reducing corruption. Such a provision is not available in any of the democratic countries including the UK. While the honest have to be protected, the dishonest seem to corner the full benefit of Article 311. Hence there is need for a comprehensive examination of the entire corpus of administrative jurisprudence to rationalise and simplify the procedures. One of the indicators of lax enforcement is delay in sanctioning prosecution of a delinquent by the competent authority. Reference may be made to the Annual Report of the Central Vigilance Commission for the year 2004. Out of 153 cases for sanction, 21 cases were pending for more than 3 years, 26 cases between 2-3 years, 25 between 1-2 years. The departmental enquiries are soft-pedalled either out of patronage or misplaced compassion.

There are two, somewhat contrary, approaches in dealing with corruption and abuse of office. The first is overemphasis on values and character. Many people lament the decline in values and the consequent rise in corruption. The implicit assumption is that until values are restored, nothing much can be done to improve the conduct of human beings. The second approach is based on the belief that most human beings are fundamentally decent and socially conscious, but there is always a small proportion of people, which cannot reconcile individual goals with the good of society. Such deviant people tend to pursue personal gain at the cost of public good and the purpose of organized government is to punish such deviant behaviour. If good behaviour is consistently rewarded and bad behaviour consistently punished, the bulk of the people follow the straight and narrow path. However, if good behaviour is not only not rewarded, but is actually fraught with difficulties and bad behaviour is not only not punished, but is often extravagantly rewarded, then the bulk of the people tend to stray from the honourable path.

In the real world, both values and institutions matter. Values are needed to serve as guiding stars, and they exist in abundance in our society. A sense of right and wrong is intrinsic to our culture and civilization. But values need to be sustained by institutions to be durable and to serve as an example to others. Values without institutional support will soon be weakened and dissipated. Institutions provide the container, which gives shape and content to values. This is the basis of all statecraft and laws and institutions. While incentives and institutions matter for all people, they are critical in dealing with the army of public servants – elected or appointed – endowed with authority to make decisions and impact on human lives and exercising the power to determine allocation of resources. Public office and control over public purse offer enormous temptation and opportunity to promote private gain at public cost. Therefore, creation of institutions and designing of incentives are of utmost importance in promoting ethical conduct of public servants.