INDUSTRIAL REVOLUTION AND THE EMERGENCE OF CAPITALISM

The Scientific & Technological Innovations, which made the Revolution Possible

Steam Power: The invention of the use of steam was one of the most revolutionary discoveries which greatly facilitated the adoption of the machine methods of production. Prior to the discovery of the system power also machines were in use, but the progress was rather slow due to lack of good motive power. These machines were worked on water or wind-power

Iron and Steel: The introduction of steam-driven machinery also made it desirable that the wood machinery should be replaced by machinery made of some durable material, and thus usage of iron was a natural development. But as iron was not available in sufficient quantity an effort was made to increase its production through the use of cocking process. In 1829 Nelson invented a hot blast which made the use of raw coal, instead of coke, possible for the manufacture of iron. This invention greatly helped the growth of iron industry of Clyde.

Development of Coal Industry: The increasing use of steam power and iron and steel necessitated the development of coal industry. In fact the coal and the iron are the two foundations of the modern industrial society and a country lacking in either stands at a disadvantage.

Changes in Means of Communication: Between 1800 and 1820 about 200 miles of rail lines were in operation in Britain. They were mainly used to carry raw material. Efforts were also made to bring improvements in road and inland waterways. As a result of all these changes Britain came to have thousand of good roads which greatly reduced the transportation cost.

Textile Industry: By 1800, several major inventions had modernized the cotton industry. In the process one invention led to another.

Improvements in Engineering Techniques: The mechanical engineers particularly played an important role in the improvement of machinery as well as its efficient use. They made use of iron and steel in place of wood to create complex machinery. 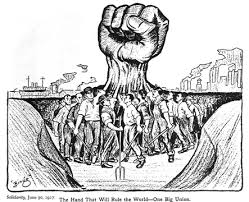 Industrial revolution led to the rise of industrial capitalism and finance capitalism. Before the industrial revolution goods were produced at home with the help of simple and cheap tools which did not need much capital. But with the installation of big machines huge funds were needed and a class of capitalist made its appearance. However, with the passage of time the industrial operations grew still more complex and enormous funds were needed which could not be provided by the capi­talists from their individual resources. Therefore, they began to look to­wards investment bankers for these funds. This ushered in era of Finance Capital. Though the industrial revolution was majorly an economic phenomenon, it greatly affected the social and political life of the countries it was prevalent in.

Social Impacts: In the special sphere also the industrial revolution pro­duced far-reaching consequences. In the first place, the growth of factory system resulted in the growth of new cities. Workers shifted to places near the factories where they were employed. This resulted in the growth of a number of new cities like Leeds, Manchester, Burmingham and Sheffield in Britain, which soon became the centres of industry, trade and commerce. Secondly, the rise of cities was accompanied by the growth of slums. Before the advent of industrial revolution, the industry was scattered throughout the country. Artisans generally worked in their cottages or shops and were not entirely dependent on trade for their livelihood. They often combined manufacturing and agriculture.

Political Impact: In the political sphere also the industrial revolution had manifold impact. In the first place it led to colonization of Asia and Africa. Great Britain and other industrial countries of Europe began to look for new colonies which could supply them the necessary raw materials for feeding their industries and also serve as ready market for their finished industrial products. Therefore, the industrial countries carved out extensive colonial empires in the nineteenth century. In fact these countries added so much territory to their empire that one historian has described it as “the greatest land grab movement in the history of the world.” It is well known that colonialism produced adverse effects on the local people and resulted in their uthless exploitation. However, it cannot be denied that it also paved the way for the industrialization of these territories because the European colonizers set up certain industries in these areas.

The Industrial Revolution was a mixed blessing. It had both advantages and disadvantages.