Temples and Architecture of Rajasthan

Hindu and Jain Temples of Rajasthan

Hinduism and Jainism were both influential in Rajasthan and they are the predominant religions of this state. As a result, the beliefs and faiths of Hinduism as well as Jainism are reflected to a larger extent through the architectural constructs of Rajasthan. The feelings of devotion, bliss, rites, rituals, superstitions and sacrifice, all amalgamate in the magnificent temples of Rajasthan.

The Brahma Temple is located in Pushkar. It is dedicated to the Hindugod of 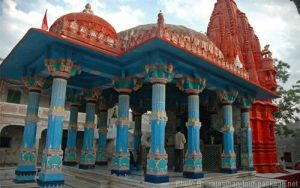 Eklingji Temple is located in the town of Kailashpuri, about 22 kilometers from Udaipur on national highway 8. This temple is dedicated to Lord Shiva. The most noteworthy aspect of this temple is the four-faced idol of Eklingji (Lord Shiva) that is made of black marble. This figure has a height of about 50 feet and the four faces depict the four aspects of Lord Shiva. Shivratri is the festival celebrated in this temple. This temple also has idols of Goddess Saraswati and Yamuna and Lord Ganesha and Kartikeya. It can be said that the Eklingji temple symbolizes Hindu faith and belief through its architecture.

Dwarkadhish Temple of Kankroli is one of the prominent tourist attractions of Nathdwara located in the Kankroli Village. This temple also famous as ‘Kankroli Temple’. Hindu deity Krishna is the sole deity of this beautiful temple. Here the red stone idol of the deity is praise with full devotion and dedication. Many believe that red stone idol of Lord Krishna had been brought from Mathura. Maharana Raj Singh I built the temple in 1676. This temple belongs to Vaishnavas and the Vallabhacharya sects.

Varah Temple is located in Pushkar. This temple is dedicated to Varah (wild boar), an incarnation of Lord Vishnu. This temple was built in the 12th century by a king named, Anaji Chauhan. It is known that this temple was subjected to destruction and renovated several times. Varah Temple serves as a home to a huge white idol of Lord Varaha along with carvings, sculptures, gold styled pillars depicting Garuda, the mythical bird and life-size statues of door men. Varah Temple is considered to be one of the largest and oldest temples in Pushkar

Karni Mata Temple is situated in Bikaner. It is also known by the other name of Nari Mata Temple and is dedicated to Karni Mata, an incarnation of goddess Durga. In the temple, one will be able to see the idol of Karni Mata wielding a trishul (trident) in her hand. A plethora of rats will be evident to the visitors in this temple. These rats move freely in the temple and are believed to be the reincarnations of Karni Mata and her sons.

Kaila Devi in Karauli temple is a Hindu religion temple, known to be one of the 9 Shakti peeths of goddess Durga. Located on the banks of Kalisil river at a distance of 23 km from the Karauli city. Goddess Kaila Devi is diety of the temple and millions of people visit it every year. Goddess Kaila is believed as the protector and savior of mankind. Built by the princely Jadaun Rajput rulers of the Karauli empire.

Maharaja Gopal Singh Ji laid the foundation of the temple in 1723 and the work was completed in 1730.

Savitri Temple is also located in Pushkar. This temple is dedicated to goddess Savitri, the first wife and consort of Lord Brahma. This temple is a fine representation of marble architecture.

Surya Narayana Temple is the beautiful Lord Sun temple which is known for its unique and marvelous architectural design.

Surya Narayana was constructed in the 15th century AD. There is a tower over the altar of the temple which has numerous projections of circular plan. Smaller protruding niches on the base of the tower has the sanctum which is laid on an octagonal plan with six porches.

Sun Temple of Ranakpur is a famous Sun or Surya temple well known as the Surya Narayan Temple. This 13th centry temple was rebuilt in 15th century after destruction. Sun temple is bilt with white lime stone in Nagara style with a delicate ornamented work.

Sun Narayan temple recieves many devotees from all around the country who came for the blessings of Lord Sun. Many devotees also visit the nearby temple of Amba Mata. This Sun temple is managed by the Udaipur Royal family trust.

The Dilwara Temples are located about 2.5 kilometers from Mount Abu. There are 5 Dilwara Temples in Rajasthan namely, the Vimal Vasahi, Pithalhar, Mahaveer Swami, Luna Vasahi and Khartar Vasahi. They are dedicated to Jain Tirthankars. They were constructed in 11th and 13th centuries AD. All these temples reflect excellent architectural work. They are made of white marble. The unique feature of the temples is a combination of simplicity and exquisiteness. The Dilwara Temples are surrounded by mango trees and hills which add to the magnificence of these temples.

Ranakpur Jain Temples are located in the Pali District of Rajasthan. These temples are renowned for their architecture. Among the Ranakpur Temples, the main temple is Chamukha Temple. It is dedicated to Tirthankara, Rishabdeo. The temple houses a four-faced figure of Rishabdeo. The columns of the temple are known for their intricately carved designs and also serve as specimens of the art and architecture that prevailed in Rajasthan during the yester years.

Mahavir ji Temple of Rajasthan is known to be among the holiest pilgrimages of Rajasthan. This temple overlooks the River Gambhir and is dedicated to Lord Mahavira. It is made of white marble.

Some of the other Jain Temples which occupy an integral position in the land of Rajasthan are the Osiyan Temple, Rajasthan Jain Temple and Juna Temple.