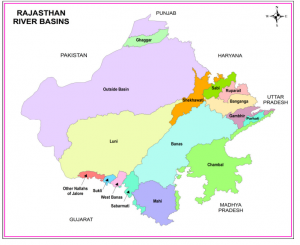 Other Rivers Originating in Rajasthan

Banganga River – originates from Bairath in Jaipur district, flows through Ramgarh, Dausa and Baswa about 164 km and enters Vair tahsil Bharatpur and then into Agra district of Uttar Pradesh.

Sukel River – Originates at hills of Jalor and falls in Rann of Katchh. 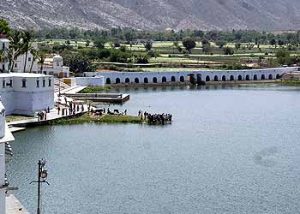 Sambhar Lake:-
Situated – on the border of Jaipur and Nagaur districts
Length – 32 Km ; Breadth – 3 Km to 12 Km
Max. Lake Area – 234 Sq. Km
Districts- Jaipur, Nagaur
It is the largest Lake of Rajasthan
It produces/makes 35 crore tons of common Salt (Nacl, No2 So4)
Salt is manufactured by Solar Evaporation method from March to July

Situated – near Deedwana Town in Nagaur district
Length – 4 Km; Breadth – 2 Km
District – Nagaur
Depression is surrounded by sand dunes/Hills but in west surrounded by isolated spur of the Aravalli.
Bed of the depression shows the presence of block clay.

Built by – Maharana Jai Singh in the year 1691
Situated-Udaipur
Breadth – 1 Km to 8 Km, with circumference of 50 Km
It is a manmade lake/artificial lake
It is the largest fresh water lake of Rajasthan
It contain seven islands inhabited by Bhils, they use rough boats, called Bhil for transportation
Two canals (i) Shyampura, (ii) Bhat canals built for irrigation purposes

Built by – Maharaja Raj Singh of Udaipur in 1662 A.D.
Length – 6.5 Km ; Breadth – 3 Km
Districts – Raj Samand district
It is used for irrigation
It is feed by Banas feeder canals
Raj Samand is famous for one of the largest literary works ever inscribed on stone.

Situated – In North of Pichhola Lake
Area – 3 Sq. Km
It is a artificial Lake
It has a small island which has been made a public park with a fountain

Built by – Maharana Udai Singh between 1559 and 1565
Situated – 15 Km east of Udaipur
Length – 4 Km ;Breadth – 3 Km
It is the site of famous meeting between Maharana Pratap and Kunwar Man Singh

Built by – Ana Ji the Lord of Ajmer in 1137 A.D.
Situated – Ajmer city
It emperor Jahangir built Daulat Bagh (Subhash Garden) near this lake
Emperor Shahjahan built 378 m log ‘ Baradari’ on the lake to have a scenic view.

Situated – 11 Km west of Ajmer City
Area – 3 Sq. Km
It is small Natural Lake
It is of an irregular elliptical shape surrounded by hills except in the east
Around its bank are big temples cenotaphs and bathing Ghats.
Hindu submerges the ashes of their departed relatives in the lake, as it is considered to be very holy.

Situated – Near Kolayat Town about 48 Km South West of Bikaner City
Here is the famous Kapil Muni Ashram
Every year on Kartik Purnima, there is a fair attended by Hindu worshippers.

Situated – About 6 Km from Jodhpur City
It is a large Artificial Lake
It has got a small palace & small pavilions living on its banks.
It is just near the famous Mandore Gardens.