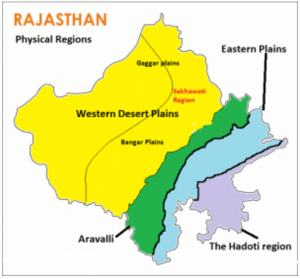 The main geographic feature of Rajasthan is the Aravalli Range, which runs across the state from southwest Guru Peak (Mount Abu), which is 1,722 m in height to Khetri in the northeast, for more than 850 km. This divides Rajasthan into 60% in the North West of the lines and 40% in the southeast. The northwest tract is sandy and unproductive with little water but improves gradually from desert land in the far west and northwest to comparatively fertile and habitable land towards the east of India. The area includes the Great Indian (Thar) Desert. Mount Abu is at the southwestern end of the range, separated from the main ranges by the West Banas River, although a series of broken ridges continues into Haryana in the direction of Delhi where it can be seen as outcrops in the form of the Raisina Hill and the ridges farther north of India. About three-fifths of Rajasthan lies northwest of the Aravallis, leaving two-fifths on the east and south of India.

On the basis of the existing relief features, Rajasthan has been divided into the following physiographic divisions:

The surface of western Rajasthan is covered with vast stretches of sand occasionally interrupted by rocky protruding right up to the Pakistan border.

63 per cent sand dune area of Rajasthan is concentrated in the desert districts of Barmer, Jaisalmer and Bikaner.

The principal and most dominant mountain range of Rajasthan is the Aravalli range. The geological history of the Aravalli range can be traced back probably close of the dharwar times. This range runs diagonally across the State from northeast near Delhi and extends to southwest up to the Plains of Gujarat, for a distance of about 692 kilometers

This division constitutes east Sirohi, nearly the whole of Udaipur except a narrow belt in the east and whole of Durgarpur district. The highest section of the Aravalli range known as ‘Bhorat’ Plateau lies northwest of Udaipur between Kumbhalgarh – Gogunda and the average elevation of this plateau is 1,225 metres.

Northern edge of Bhorat Plateau marks the boundary of north eastern hilly tract in the southwest. North of Kumbhalgarh, especially at the Alwar hills the elevation varies between 550 m to 670 m.

The area on the northeast, east and southeast of the Aravalli range is known as the Eastern Plain. The Vindhyan Plateau marks the southeastern limit of the Plain. The western boundary is demarcated by the eastern edge of the Aravalli up to north of Udaipur.

The great watershed of India runs in an easterly direction starting From Udai Sagar, east of Udaipur. The watershed acts as the southern boundary of the Mewar Plains and south of this watershed is the Chappan Plain. The region is marked by various types of erosional features, produced in the granite and gneiss rocks mark the topography of the area.

This plain drained by the tributaries of the Mahi River lies south of the great Indian watershed in southeastern Udaipur, Banswara and the southern part of Chittorgarh district. The Chappan area is deeply and intricately eroded resulting in the formation of separate hillocks, which is not identical to the Mewar plain in the north. This deeply dissected area is locally known as ‘Begaar’ and includes the hilly tracts of Banswara and Dungarpur.

The eastern part along the Chambal River is covered by the Hadoti Plateau. The Great Boundary Fault of the Aravallis forms its northwest boundary which extends eastward across the Rajasthan border. River Chambal drains the large part of this area. The Plateau has been divided into two smaller units:

The scarps are facing towards the southsoutheast between the Banas and the Chambal and extend towards the east over Bundelkhand.

The Deccan Lava Plateau is also known as ‘pathar (stony) or ‘uparmal’ plateau. It is a wide stony upland, including Kota-Bundi plateau section.