ÿ Distance covered by Bharatmala Project in the state

ÿ To be developed at Jaisalmer Defence area

– Cairn India operated by oil reserves of the field, crossing a significant

roads running through the border areas in Rajasthan.

developed under the project.

– “Most of the roads are close to Pakistan border.

– The government is proposing to build about 5,000 km of road network all 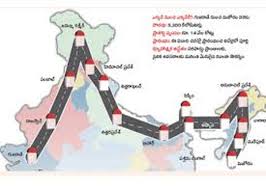 Mission is a national campaign by the Government of India, covering 4041

statutory towns, to clean the streets, roads and infrastructure of the country

– Damoh (Madhya Pradesh) came at the bottom of 476, preceded by

Bhind(MP), Palwal and Bhiwani, both in Haryana, Chittaurgarh (Rajasthan),

and Sambalpur in Odisha at 467 rank.

– and has been named as Pink Line.

and Ganga Rejunivetion Uma Bharti from Jaipur, Rajasthan launched the

through a holistic and integrated approach involving all stakeholders, making

it a mass movement.

– Gadkari has approved are 1,423 km long roads in Indo-Pak border areas in

centre to solve the problems of Indian army jawans .

– and agreements worth $22 billion between Indian firms including the Adani

group, Bharti Airtel and Welspun, and Chinese business houses at a function

– motor manufacturing plant in the northern state of Rajasthan jaipur .

– This would help to save up to 734 million units per year in the state.

– To be launched in five Districts- Udaipur, Dungpur, Banswarda, Bara and

lovers across the globe.

the Maharana Pratap University of Agriculture and Technology (MPUAT)

– rajasthan contributing about 80% area and production of methi of the country.

V of the Constitution of India in accordance with the Census 2011. Presently,

5,034 villages and six municipalities are included in these scheduled areas.

– As per the new proposal, number of villages and municipalities under the

scheduled areas would increase to 5,706 and nine respectively.

47 new Panchayat Samities in the state.

– The Raje government will introduce new system of self-attestation and

declaration of documents from January 1, 2015 by abolishing the old system

of affidavit submission of every official documents for job, property, housing,

and in government functioning.

– according to the forest survey of india report 2013 Non-Forested area is 94.07

– State Government of Rajasthan on 30 June 2014 declared Camel as

the State animal in Cattle category.

– Chinkara will be the state animal in animal category

Rajasthan government announced that it will develop a biosphere

– The Rajasthan government announced that it will develop a biosphere reserve

– “The corridor will be named Rajiv Gandhi Biosphere Reserve. It is a very

– Sanctuaries which will be connected through the corridor include Ramsagar,

Shergarh in Bundi and Bhainsrorgarh Sanctuary in Chittoragarh district.