Potential areas of Socio-political conflicts between and within Indian States,

Various disputes amongst the Indian states are :-

(i) Cauvery water dispute between Tamil Nadu, Karnataka and Kerala.

(iii) The Tungabhadra water dispute between Andhra Pradesh and Karnataka.

(iv) The Aliyar and Bhivani river water dispute between Tamil Nadu and Kerala.

(xii) The Barak river water dispute between Assam and Manipur.

Efforts are made to resolve disputes through negotiations amongst the basin states with the assistance of the Central Government. Many of these interstate river water disputes have been settled on the basis of equitable apportionment which is the universally accepted principle. Adjudication through appointment of water disputes tribunals is also resorted to as and when require. So far, the following tribunals have been appointed to resolve inter-state water disputes:

(i) The Godavari Water Disputes Tribunal

The first three Tribunals have given their final reports.

Cauvery Water Disputes Tribunal gave its interim order in June 1991 and the final order is awaited. The Ravi and Beas Tribunal submitted its report in January, 1987. A further reference was made to the Tribunal comprising of a suo-moto reference by the Central Government and references received from the Governments of Punjab, Haryana, and Rajasthan seeking explanation/guidance on certain points in the report. Further report of the Tribunal is awaited. The New Krishna Water Disputes Tribunal was set up on April 2, 2004.

Central Government has also received request from the state Government of Goa in August 2002 for the constitution of Tribunal for adjudication of water disputes relating to Madei Inter-state River among the states of Goa, Karnataka and Maharashtra. Subsequently, Goa expressed the desire in June, 2003 to settle the disputes through negotiations.

In developing country like India, the inter-state river water disputes have to be resolved quickly and amicably. This is most urgent for the proper utilization of water resources and economic growth.

1. Assam – Nagaland:- These two states share a 434 kilometre boundary, but Nagaland has behaved aggressively towards Assam ever since its inception in 1963 and has in fact encroached on vast tracts of land in upper-Assam districts of Sivasagar, Jorhat and Golaghat.
The Centre had tried to resolve the turmoil by forming the Sundaram Commission in 1971 and Shastri Commission in 1985, and though both commissions ruled in favour of Assam, no solution was implemented, as Nagaland refused to accept the recommendations. Assam currently has a pending lawsuit with Supreme Court on these border issues: a verdict is still awaited.

2. Maharashtra-Karnataka:- Five decades ago, under the States Reorganisation Act, 1956, some parts of Bombay, Hyderabad, Madras and Coorg were joined with the erstwhile state of Mysore to form Karnataka. In the process, 865 Marathi-speaking villages in Belgaum, Karwar, Gulbarga and Bidar were merged with Karnataka. This is the primary cause of dispute between the two states.

3. Gujarat – Rajasthan:- The dispute between Gujarat and Rajasthan relates to Mangadh Hill, located on the border of the two states. Gujarat claims half of the hill, while Rajasthan claims the entire hill is theirs. The dispute is 40 years old, though the Rajasthan Government presently has control over the hill.

According to folklore, hundreds of tribals were killed in the hills while protesting against British rule in 1911. Their relatives gather there every year in the month of January to pay their respects to the dead. The Panchmahal district administration of Gujarat recently started constructing a road to reach hill, along with forest huts and hand pumps for the pilgrims. The Rajasthan government raised strong objections to this.

Many land owners have filed complaints for illegal encroachment on their land, alleging that Rajasthanis owning the adjacent pieces of land indulge in illegal activities on their lands. So far, no development from both sides has taken place to resolve the issue.

4. Karnataka- Kerala:- In 1956, the Reorganisation Committee decreed that the district of Kasaragod, comprising mainly of Kannada- speaking people, be made part of Kerala. Since then, people in the district have complained of “step-motherly” treatment from Kerala Government.

5. Odisha – West Bengal:– The dispute between these states has been going on for more than 30 years. This is a fierce territorial dispute between the states at all levels – points of skirmish are farmers disputing land at the border, land grabbing by both states to build government institutions and people living at the border holding dual voter ID cards to achieve political motives.

6. Assam – Meghalaya:- These states have been embroiled in a border dispute for decades now. It first started when Meghalaya challenged the Assam Reorganisation Act of 1971, which gave Part 1 and Part 2 of Mikir Hills to Assam and those, according to Meghalaya, are part of United Khasi and Jaintia Hills. 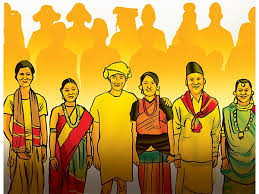 Internal Threats Faced by India are as follows:-

External Threats Faced by India are as follows:-

Back to Table of Contents
Naxal Problems,

Back to Table of Contents
Terrorism,

Terrorism is the unofficial or unauthorized use of violence and intimidation in the pursuit of political aims.

Mazor terrorists faced by india are:-

India has been effected by the terrorist activities in the past as follows:-

The problems in dealing with terrorism

Back to Table of Contents
Communalism,

Communalism is a strong allegiance to one’s own ethnic group rather than to society as a whole. Communalism become extreme when the ethnic group feel that their issues are different from other ethnical groups and are conflicting.

India is a land of several religions and different communities have coexisted here peacefully throughout the history. Divide and rule policy of Britishers have caused the problem of ethical conflicts in the nation.

Why a law needed?

More arguments for a separate law

Sets conditions for the state government to declare an area as communally disturbed.

A competent authority can take measures (such as regulating assembly, directing persons to deposit their arms etc) to control communal violence.

Special courts to try offences under this law. Increased punishment.

Features in the draft bill

This bill has been amended by the NAC and a new draft introduced in 2011.

Some issues with the draft

Back to Table of Contents
Cyber issues,

Back to Table of Contents
Drug trafficking