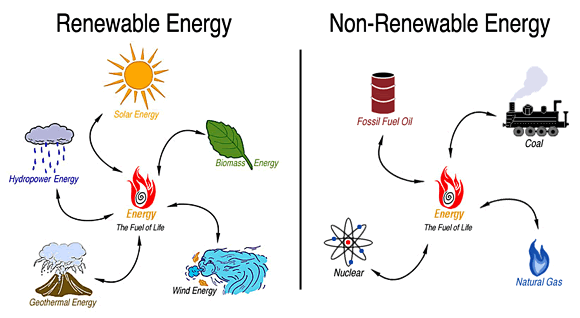 The sources of energy are of following types:

(a) Coal and Lignite:

Lignite production was 20.44 million tonnes in 2005-06. According to an estimate, coal reserves in India would last about 130 years. India is now the fourth largest coal producing country in the world. Coal deposits are mainly found in Orissa, Bihar, Bengal and Madhya Pradesh. It provides employment to 7 lakh workers.

(b) Oil and Natural Gas:

In India it is found in upper Assam, Mumbai High and in Gujarat. The resources of oil are small in India.

In 1950-51, the total production of oil in India was 0.3 million tonnes. It increased to 32.4 million tonnes in 2000-01. Despite tremendous increase in oil production. India still imports 70% of has oil requirements from abroad. In 1951, there was only one oil refinery in Assam.

After independence 13 such refineries were set up in public sector and their refining capacity was 604 lakh tonnes. After implementation of economic reforms, private refineries are also engaged in oil refining. As per current rate of consumption, oil reserves in India may last about 20 to 25 years.

There are three main sources of power generation:

It is generated in India at various power stations with the help of coal and oil. It has been a major source of electric power. In 2004-05, its share in total installed capacity was 70 percent.

It is produced by constructing dams over overflowing rivers. For example Bhakra Nangal Project, Damodor Valley Project and Hirakund Project etc. In 1950-51, installed capacity of hydro-electricity was 587.4 MW and in 2004-05, it was 19600 MW.

India has also developed nuclear power. Nuclear Power plants use uranium as fuel. This fuel is cheaper than coal. India has nuclear power plants at Tarapur, Kota (Rajasthan) Kalapakam (Chennai) Naroura (UP). Its supply accounts for only 3 percent of the total installed capacity.

India is one of the fastest growing countries in terms of energy consumption. Currently, it is the fifth largest consumer of energy in the world, and will be the third largest by 2030. At the same time; the country is heavily dependent on fossil sources of energy for most of its demand. This has necessitated the country to start aggressively pursuing alternative energy sources – solar, wind, biofuels, small hydro and more.

India‘s wind power potential has been assessed at 48500 MW. The current technical potential is estimated at about 13 000 MW, assuming 20% grid penetration, which would increase with the augmentation of grid capacity in potential states. The state-wise gross and technical potentials are given below India is implementing the world’s largest wind resource assessment program comprising wind monitoring, wind mapping and complex terrain projects.

Hydro power is the largest renewable energy resource being used for the generation of electricity. The 50,000 MW hydro initiatives have been already launched and are being vigorously pursued with DPRs for projects of 33,000 MW capacity already under preparation. Harnessing hydro potential speedily will also facilitate economic development of States, particularly North-Eastern States, Sikkim, Uttaranchal, Himachal Pradesh and J&K, since a large proportion of our hydro power potential islocated in these States. In India, hydro power projects with a station capacity of up to 25 megawatt (MW) each fall under the category of small hydro power (SHP).

India is a solar rich country. India is a country near the equator – which means that given its geographical location, it is subject to a large amount of solar radiation throughout the year. India is also, according to area, the 7th largest country in the world.

Globally, India is in the fourth position in generating power through biomass and with a huge potential, is poised to become a world leader in the utilization of biomass. Biomass power projects with an aggregate capacity of 773.3 MW through over 100 projects have been installed in the country. For the last 15 years, biomass power has become an industry attracting annual investment of over Rs. 1,000 billion, generating more than 09 billion unit of electricity per year. More than 540 million tons of crop and plantation residues are produced every year in India and a large portion is either wasted, or used inefficiently.