Cultural diplomacy is a specified form of diplomacy that encourages a deliberate effort of cultural exchange. It facilitates the understanding of foreign cultural dynamics. Itis exchange of ideas, information, art, lifestyles, value systems, traditions, beliefs another aspects of cultures.

The Indian Diaspora is a generic term to describe the people who migrated from territories that are currently within the borders of the Republic of India. It also refers to their descendants. The Diaspora is currently estimated to number over twenty million. composed of “NRIs” (Indian citizens not residing in India) and “PIOs” (Persons of Indian Origin who have acquired the citizenship of some other country). The Diaspora covers practically every part of the world. It numbers more than a million each in eleven countries, while as many as twenty-two countries have concentrations of at least a hundred thousand ethnic Indians. 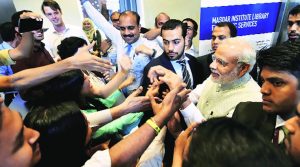 Cultural diplomacy can be defined as a track II, non-conventional diplomatic practice, aimed at identifying cultural patterns of behavior as well as the commonalities of two or more competing groups in order to find a common ground of dialogue, while preserving culturally sensitive aspects.

Alternatively, Cultural diplomacy can be defined as “the exchange of ideas, information, art and other aspects of culture among nations and their peoples to foster mutual understanding”.

Cultural diplomacy includes exchanges between people in different countries, through which individuals are able to visit foreign countries and learn about the culture and society of the foreign country. It includes the study of another country’s language, traditions, and lifestyle. Culture is an exceedingly broad term, thus contributing to the vast range of areas that fall under the definition of cultural diplomacy. For instance, culture includes literature, the arts in general, customs, habits and traditions, humans’ behavior, history, music, folklore, gestures, and social relationships. Thus, any interaction or exchange between the people of two countries in any of these areas is considered cultural diplomacy, as is the study of these fields as they exist in a foreign country.

Independent India recognised the importance of cultural diplomacy, as an instrument for people to people connectivity. Ministries of External Affairs and Culture share the responsibility for promoting cultural diplomacy. India has signed 126 bilateral cultural agreements and is currently implementing 58 Cultural Exchange Programmes with other countries. Bilateral Agreements, however, are not prerequisite for the conduct of cultural diplomacy.

To achieve this objective, India set up a nodal body, called the Indian Council for Cultural Relations (ICCR) in 1950.  Since its creation, ICCR has used a number of instrumentalities, like Cultural Centres, Festivals of India, Chairs of Indian Studies, etc. in promoting not only cultural but broader linkages with countries across the world.

In an endeavour to strengthen its relationship with Southeast Asia, India has actively used culture as an important instrument of its Look East Policy (LEP). Unlike in the past when cultural diplomacy was largely viewed as India’s veiled effort towards cultural dominance, the renewed thrust on the cultural diplomacy has received genuine appreciation from Southeast Asian countries.

The Indian government has taken a number of policy initiatives in order to engage this diaspora. The Pravasi Bharatiya Diwas, begun in 2003, is held every year in January. The Indian government is also working towards setting up a Person of Indian Origin (PIO) University in India and India Development Foundation, which can facilitate the development of human resources.

The major thrust of India’s cultural diplomacy is fostering better trade and economic relations and at the political level. The important aspect includes –