Concept of Decolonization, Nationalism and Socialism, Globalization and Concept of Modernity

Decolonization refers to the undoing of colonialism, the establishment of governance or authority through the creation of settlements by another country or jurisdiction. The term generally refers to the achievement of independence by the various Western colonies and protectorates in Asia and [Africa]] following World War II. This conforms with an intellectual movement known as Post-Colonialism. A particularly active period of decolonization occurred between 1945 to 1960, beginning with the independence of Pakistan and the Republic of India from Great Britain in 1947 and the First Indochina War. Some national liberation movements were established before the war, but most did not achieve their aims until after it. Decolonization can be achieved by attaining independence, integrating with the administering power or another state, or establishing a “free association” status. The United Nations has stated that in the process of decolonization there is no alternative to the principle of self-determination. ecolonization was overseen by the United Nations, with UN membership as the prize each newly independent nation cherished as a sign of membership in the community of nations. The United Nations Trusteeship Council was suspended in 1994, after Palau, the last remaining United Nations trust territory, achieved independence. From 1945 and the end of the twentieth century, the number of sovereign nation-states mushroomed from 50 to 192 and few stopped to ask if this was the right direction for human political organization to be moving. Decolonization may involve peaceful negotiation, non-violent protest or violent revolt and armed struggle. Or, one faction pursues one strategy while another pursues the opposite. Some argue because of neocolonialism many former colonies are not truly free but remain dependent on the world’s leading nations. No one of principle wants to deny people their freedom, or perpetuate oppression, injustice and inequality. many celebrate decolonization in the name of freedom and realization of the basic human rights of self-determination, others question whether equality, justice, peace, the end of poverty, exploitation and the dependency of some on others can be achieved as long as nation-states promote and protect their own interests, interests that are not always at the expense of others’ but which often are. As freedom spreads around the world, as more people gain the liberty to determine their own futures, some people hope that a new world order might develop, with the nation state receding in significance. Instead, global institutions would consider the needs of the planet and of all its inhabitants.

Nationalism, ideology based on the premise that the individual’s loyalty and devotion to the nation-state surpass other individual or group interests.

Nationalism is a modern movement. Throughout history people have been attached to their native soil, to the traditions of their parents, and to established territorial authorities; but it was not until the end of the 18th century that nationalism began to be a generally recognized sentiment molding public and private life and one of the great, if not the greatest, single determining factors of modern history. Because of its dynamic vitality and its all-pervading character, nationalism is often thought to be very old; sometimes it is mistakenly regarded as a permanent factor in political behaviour.  The American and French revolutions may be regarded as its first powerful manifestations. After penetrating the new countries of Latin America it spread in the early 19th century to central Europe and from there, toward the middle of the century, to eastern and southeastern Europe. At the beginning of the 20th century nationalism flowered in the ancient lands of Asia and Africa. Thus the 19th century has been called the age of nationalism in Europe, while the 20th century has witnessed the rise and struggle of powerful national movements throughout Asia and Africa.

Socialism is an economic system where the ways of making money (factories, offices, etc.) are owned by a society as a whole, meaning the value made belongs to everyone in that society, instead of a group of private owners. People who agree with this type of system are called socialists.  There are two ways socialists think that society can own the means of making wealth: either the state (government of the country) is used or worker-owned cooperatives are used. Another important belief is that management and sharing are supposed to be based on public interests. Socialists believe that everything in society is made by the cooperative efforts of the people.

There are many kinds of socialism, so no one definition can apply to all of them; however, in all types, the workers supposedly own the means of production. The major differences between the different varieties are the role of the free market or planning, how the means of production are controlled, the role of management of workers and the government’s role in the economy. In most Socialist Societies, corruption and lack of incentive for workers to produce reduce production and therefore the average standard of living

Social democracy is a kind of socialism that tries to mix parts of socialism with capitalism. In this system, the government takes wealth (money) from the rich and gives it to the poor like in a Communist state, but despite there being more government control and less chance to make a very large amount of money, people can still run their own businesses and own private property.

In many countries that use social democracy, some services and industries are subsidized (given money to help them run) and/or partly controlled by the government.

Another kind of Socialism is “Collectivization.” In this system, money and goods are shared more equally among the people, with the government in control. In theory, this system results in the gap between classes getting smaller, with the poorest of a nation’s people being helped by the state while the richest agree to higher taxes and economic.  Many countries see Socialism differently.  Socialist International is an organization dedicated to the cause of promoting socialist ideals, and has ties with many Socialist parties, especially Social Democratic parties.

A Welshman, Robert Owen, was the first socialist. His followers began calling themselves socialists in 1841.  He is still regarded as a pioneer of the Co-operative Movement in Britain. He said that workers should own the companies they worked for. The workers would then share the profits among themselves. He set up a new model factory in New Lanark, Scotland. Karl Marx is the most well-known creator of the theory of socialism.

The term `globalisation’ means integration of economies and societies through cross country flows of information, ideas, technologies, goods, services, capital, finance and people. The essence of 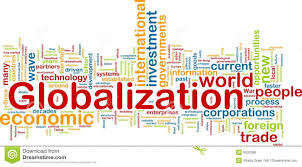 globalisation is connectivity. Cross border integration can have several dimensions – cultural, social, political and economic. In fact, some people fear cultural and social integration even more than economic integration. However, the term globalisation is used here in the limited sense of economic integration which can happen through the three channels of (a) trade in goods and services, (b) movement of capital and (c) flow of finance. Besides, there is also the channel through movement of people. Globalisation has been a historical process with ebbs and flows. During the Pre-World War I period of 1870 to 1914, there was rapid integration of the economies in terms of trade flows, movement of capital and migration of people. The inter-war period witnessed the erection of various barriers to restrict free movement of goods and services. Although after 1945 there was a drive to increased integration, studies point out that trade and capital markets are no more globalise today than they were at the end of the 19th Century. However, there are more concerns about globalisation now than before because of the nature and speed of transformation. What is striking in the current episode is not only the rapid pace but also the enormous impact of globalisation on market integration, efficiency and industrial organisation. The gains and losses from globalisation can be analysed in the context of the three types of channels of economic globalisation identified earlier. According to the standard theory, international trade leads to allocation of resources that is consistent with comparative advantage. This results in specialisation which enhances productivity. It is accepted that international trade, in general, is beneficial and that restrictive trade practices impede growth. However, even in relation to trade in goods and services, there is one concern. Emerging economies will reap the benefits of international trade only if they reach the full potential of their resource availability. This requires time. That is why international trade agreements make exceptions by allowing longer time to developing economies in terms of reduction in tariff and non-tariff barriers. “Special and differentiated treatment,” as it is described, has become an accepted principle. It is this aspect which needs to be stressed, while arguing the case of developing countries.

Modernity may be understood as the common behavioural system that is historically associated with the urban, industrial, and literate and participant societies of Western Europe and North America. It is characterised by a rational and scientific world-view, growth and the ever increasing application of science and technology, which is coupled with the continuous adaptation of the institutions of society to the imperatives of the world-view and the emerging technological ethos.

Modernity involves the rise of modern society (secularised societies with an institutional separation of the state from civil society, a much greater degree of social and technical division of labour, and the formation of nation-states uniting cultural and political borders), a rationalistic epistemology, and an individualistic and objectivistic ontology.

A series of societal changes are implicit in the process of modernisation. Agrarian societies are characterised by the predominance of ascriptive, particularistic and diffused patterns; they have stable local groups and limited spatial mobility. Occupational differentiation is relatively simple and stable; and the stratification system is deferential and has a diffused impact.

The modern industrial society is characterised by the predominance of universalistic, specific and achievement norms; a high degree of mobility; a developed occupational system relatively insulated from other social structures; a class system often based on achievement; and the presence of functionally specific, non-ascriptive structures and associations.

Historically evolved institutions continuously adapt themselves to the changes dictated by the phenomenal increase in the human knowledge that has resulted from the control humanity has over its environment.

Modernisation, as a form of cultural response, involves attributes which are basically universalistic and evolutionary; they are pan-humanistic, trans-ethnic and non-ideological. The essential attribute of modernisation is rationality.