Techniques of irrigation and soil conservations and soil health cards

In this method an attempt is made to simulate natural rainfall. Irrigation water is applied to the land in the form of a spray. This method is also known as sprinkler irrigation, Sprinklers can be used on all soil types of any topography. According to the equipment and procedure used the sprinkler method may fall in fixed type or portable type.

It is a latest advancement over other methods. The name of the method itself implies water saving. In this method irrigation water is conveyed on the surface in 12 to 16 mm diameter tubing’s fed from large feeder pipes. The water is allowed to drip or trickle slowly through the nozzle or orifices at practically zero pressure. In this way the soil in the root-zone of crops is constantly kept wet.

Soil conservation includes all those measures which help in protecting the soil from erosion and exhaustion. Soil erosion has been continuing over, such a large part of India for such a long time that it has assumed alarming proportions.

The best way to conserve soil is to increase area under forests. Indiscriminate felling of trees should be stopped and efforts should be made to plant trees in new areas. A minimum area of forest land for the whole country that is considered healthy for soil and water conservation is between 20 to 25 per cent but it was raised to 33 per cent in the second five year plan; the proportion being 20 per cent for the plains and 60 per cent for hilly and mountainous regions.

Overgrazing of forests and grass lands by animals, especially by goats and sheep, should be properly checked. Separate grazing grounds should be earmarked and fodder crops should be grown in larger quantities. Animals freely move about in the fields for grazing and spoil the soil by their hoofs which leads to soil erosion. This should be avoided.

Much of the soil erosion by river floods can be avoided by constructing dams across the rivers. This checks the speed of water and saves soil from erosion.

We can save lot of our valuable soil by bringing about certain changes in our agricultural practices. Some of the outstanding changes suggested in this context are as under:

Crop Rotation:  In many parts of India, a particular crop is sown in the same field year after year. This practice takes away certain elements from the soil, making it infertile and exhausted rendering it unsuitable for that crop. Rotation of crops is the system in which a different crop is cultivated on a piece of land each year.

Strip Cropping:  Crops may be cultivated in alternate strips, parallel to one another. Some strips may be allowed to lie fallow while in others different crops may be sown e.g., grains, legumes, small tree crops, grass etc. Various crops ripen at different times of the year and are harvested at intervals. This ensures that at no time of the year the entire area is left bare or exposed. The tall growing crops act as wind breaks and the strips which are often parallel to the contours help in increasing water absorption by the soil by slowing down run off.

Use of Early Maturing Varieties:  Early maturing varieties of crops take less time to mature and thus put lesser pressure on the soil. In this way it can help in reducing the soil erosion.

Contour Ploughing:  If ploughing in done at right angles to the hill slope, following the natural contours of the hill, the ridges and furrows break the flow of water down the hill This prevents excessive soil loss as gullies are less likely to develop and also reduce run-off so that plants receive more water.

Soil Health Card (SHC) is a Government of India’s scheme promoted by the Department of Agriculture & Co-operation under the Ministry of Agriculture and Farmers’ Welfare. It is being implemented through the Department of Agriculture of all the State and Union Territory Governments. A SHC is meant to give each farmer soil nutrient status of his/her holding and advice him/her on the dosage of fertilizers and also the needed soil amendments, that s/he should apply to maintain soil health in the long run.

SHC is a printed report that a farmer will be handed over for each of his holdings. It will contain the status of his soil with respect to 12 parameters, namely N,P,K (Macro-nutrients) ; S (Secondary- nutrient) ; Zn, Fe, Cu, Mn, Bo (Micro – nutrients) ; and pH, EC, OC (Physical parameters). Based on this, the SHC will also indicate fertilizer recommendations and soil amendment required for the farm. 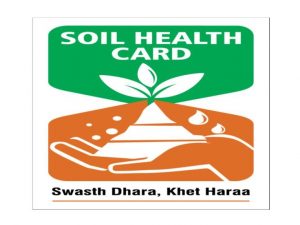 The card will contain an advisory based on the soil nutrient status of a farmer’s holding. It will show recommendations on dosage of different nutrients needed. Further, it will advise the farmer on the fertilizers and their quantities he should apply, and also the soil amendments that he should undertake, so as to realize optimal yields.