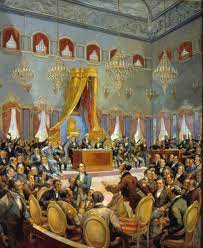 . Parallel to the revolts of the poor, unemployed and starving peasants and workers in many European countries in the year 1848, a revolution led by the educated middle classes was under way. Events of February 1848 in France had brought about the abdication of the monarch and a republic based on universal male suffrage had been proclaimed. In other parts of Europe where independent nation-states did not yet exist – such as Germany, Italy, Poland, the Austro-Hungarian Empire – men and women of the liberal middle classes combined their demands for constitutionalism with national unification. They took advantage of the growing popular unrest to push their demands for the creation of a nation-state on parliamentary principles – a constitution, freedom of the press and freedom of association.

In the German regions a large number of political associations whose members were middle-class professionals, businessmen and prosperous artisans came together in the city of Frankfurt and decided to vote for an all-German National Assembly. On 18 May 1848, 831 elected representatives marched in a festive procession to take their places in the Frankfurt parliament convened in the Church of St Paul. They drafted a constitution for a German nation to be headed by a monarchy subject to a parliament. When the deputies offered the crown on these terms to Friedrich Wilhelm IV, King of Prussia, he rejected it and joined other monarchs to oppose the elected assembly. While the opposition of the aristocracy and military became stronger, the social basis of parliament eroded. The parliament was dominated by the middle classes who resisted the demands of workers and artisans and consequently lost their support. In the end troops were called in and the assembly was forced to disband.