The Mid Day Meal mobile App of NIC Himachal Pradesh has been awarded the Digital India Gold Award 2016 on 19th December 2016 during the presentation ceremony of the Awards at Vigyan Bhawan, New Delhi. Mid-Day Meal mobile app is meant for effective reporting and monitoring of daily and monthly mid-day meal data to be sent by the schools. The app provides additional data communication mechanism for the MDM in-charge/teacher who has to send the daily/monthly data using SMS. The app, once installed on android device, does not need Internet to send MDM figures as user has option to send the figure through SMS from the app. This simplifies the job of MDM in-charge, who even does not have to remember the SMS formats. The higher authorities at Block, District and State level have a very simple and effective mechanism in shape of this app on their mobile devices for effective and efficient monitoring of daily as well as monthly data transmission by all the MDM in-charge falling under their jurisdiction. The monitoring authorities can send SMS alerts to all defaulters using single button available in the app. This is a Single Android Mobile App for all States/UTs, is multi-lingual and it works offline too. Presently, 7 States/UTs of Himachal Pradesh, Rajasthan, Haryana, Uttrakhand, Mizoram, Chandigarh, Daman & Diu are using it and Madhya Pradesh, Meghalaya, Kerala, Dadar and Nagar, Haveli are on board the software. The MDM ARMS software is available at http://mdmhp.nic.in The Mid Day Meal mobile app supplements the MIS software MDM Automated Reporting and Management System-MDM ARMS, which has also been developed by the NIC Himachal Pradesh as a product and can be used by any State Government desirous of using the SMS mode as the primary mode of data collection for mid day meals served to the students in the schools. 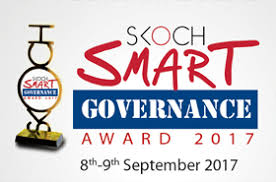 Sarathi 4.0 software has been developed by NIC team and Himachal Pradesh is first State to implement the software in all Registration and Licensing Authorities of the State and other States of India are following its implementation.

The Union Minister for Road Transport and Highways Nitin Gadkari on November 16 presented the Best State Award in the Big States category in education, infrastructure and overall development to Himachal Pradesh.

Himachal Pradesh state has is a proud recipient of National Tourism Award for being one of the most hospitable and enjoyable Tourism destination. It is also honored with 57th award for its performance for last 4 years consistently. More than 10% of the state revenue is earned by the tourism department of Himachal Pradesh. The infrastructure development is taken care by the states many programs in line with MNREGA, and a campaign called ‘Brand Himachal’ at the national level.

“Integrated Online Hotel Reservation System” of HPTDC has been awarded GOLD under category Cat-X- “Innovative use of Information Communication Technology by State Government PSU/ Cooperatives/ Federations/ Socities” for the National Award on e-Governance for the year 2015-16. GOLD is the first rank prize under individual category given by Ministry of Personnel, Govt. of India. The award was presented during the 19th National Conference on e-Governance held at Nagpur on 21st-22nd January, 2016.

in 2016 three district hospitals have been selected for the Kayakalp award in which the Zonal Hospital Dharamshala was the winner, where as Zonal Hospital Mandi was the runner up and Regional Hospital Sirmour has won the commendation award.

In 2015. Himachal Pradesh has received national award in recognition of its outstanding contribution in the field of renewable energy.

This scheme provides a state level award for the persons/organization working for the development and empowerment of women in the field of area such as health, education, sports, social services and art and culture is granted.