Himachal is called Dev Bhoomi as there is local deity that is looking over its patrons in each and every village of the state. And what better way to please the Gods than to dance for them. Dancing , when done with the body and soul gets you a direct connection with the Almighty.

In Himachal there is a long list of dances for every occasion, in every form and unique to every region. These dances are mostly performed at the local fairs and at happy occasions like marriages and coming of the devta. Women and men dressed up in their traditional attire, dance away to glory.

Dangi: One of the most prominent of folk dances from Himachal Pradesh

It is based on one of the oldest folklores in Himachal Pradesh. The dance primarily involves female dancers. This dance is performed during the harvest season in the temple of Goddess Naina Devi. There are different themes or variations of this dance. One theme depicts the love story of a majestic king and a common village girl. Other depicts the business transactions between the client and the business. This dance is filled with enthusiasm and vigor along with plethora of emotions.

Performed in the memory and as a tribute to the divine Lord Buddha, The lahaul – Spiti region witnesses the Lamas of Lahaul-Spiti region perform this devotional dance on one occasion of Chakhar, that happens once in every three years. The classical head gear worn during the performance is called Chhanak. With exceptional traditional motifs in the patch work, the costumes are made to glimmer because of its golden, black and yellow fabric. The dancers holds knives and swords in their hands while black masks cover their faces and make slow and circular movements. Wearing the traditional dresses of the lamas, The Musicians, Who too are an indispensible element in the performance play the long, pipe like structure of ‘Tangchim’, and drums, known as ‘Ghhan. 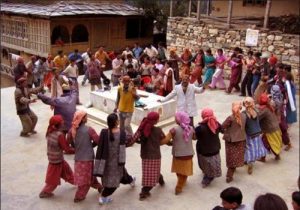 This dance is performed by the Buddhists in the monasteries and is performed once in three years. It is famous for its vivacious headgear, costumes and masks. The theme of their costumes is yellow, black and gold and is made smooth and shiny. The headgear is called the chhanak. This Himachal dance is a graceful dance in comparison with the other dances involving slow circular movements.

Performed by Buddhist Monks or the Lamas in the Monasteries on different events of celebration, The Chamm Dance is renowned detailed for costume, Elaborate Headgear and finely crafted masks. This dance is not only popular with the tourist but is also extremely accepted in Lahaul ,Ladakh and Kinnaur etc that serve as the Tibetan areas of Himachal Pradesh.

There are various forms of this dance varying region by region amongst the folk dances from Himachal Pradesh. Some of the popular ones include the Kullu Nati, the Kinnauri Nati, Gaddi Nati, Shimla Nati and so on. Each dance has its own style of costumes and music and aids in distinguishing from the rest.

Kinnauri Nati is performed during the New Festival. The dancers portray the bucolic nature of the hills, trees and the smooth flowing rivers.

Kullu Nati is the most popular one. It has about thirteen forms and is predominantly performed during the festival of Dusshera. The dancers wear colorful tunics and sway to the rhythm of the music. This dance is performed for hours together till the dancers and the orchestra have their energy drained out. Also this dance is performed in fairs and festivals.

The Shiv Badar Nati is performed during Shiv Ratri in praise of Lord Shiva, the destroyer. This dance is performed by the folk of the upper hills in Mandi.

Performed by the nomadic shepherd tribe of Gaddi in the Bharmaur region of the Chamba district, The Dandras is a traditional dance which is usually enacted with small sticks. These dance performance last for hours at times.

It looks similar to Ladakhi dance and is essentially performed on the beats of the Damman and Surna, Ladaki instruments. The music might be Ladakhi, but the dance style is very Lahauli. The dancers lock their hands and move in a rhythmic fashion. The ornaments are made of stones and beads. Dancers adorn their traditional long embroidered gowns and wear their matching jackets over it.

Thoda is a war dance that is performed before men go to war. There are old rituals that are performed by holding a bow and arrow in the hands. The dancers actually try to mimic a battle scene by dancing.

The Kayang Mala dance is one of the most popular dance in Himachal. In this, the dancers are dressed in their traditional finery, weave their arms together to form a sort of a crisscross pattern in order to appear like beads in a woven garland. They drink chhang (a rice brew) before this dance.

This dance form, from the Kinnaur and nearby areas are redolent of the historic period. The Kinnaur folk are being compared to deers. The dance form is performed with demon masks. It represents the attack of the demons on the crops and their ritual pursuing away by the forces of good. Chambha is more or less same to the Punjabi dance Bhangra. These dance forms are generally organized in areas having dense population. During their local festivals like Chaitol and Bishu, such a type of community dancing can be witnessed. In this dance form men and women hold hands and dance. Their leader is known as Ghure and others follow in his footsteps This Dance Is fabulous

The following dance forms belong to the Ropa valley and in these dances the pattern formed by the dancers seems to be as coiled serpents. The Cholamba dance is generally performed when a tiger is killed. The dead animal’s skin is stuffed and a gold ornament is put in his nose. The remains of the dead is then rotated and people dance around it.

The Nagas Kayang is a dance form which copies the snakes’s movement. The Herki Kayang is faster in rhythm and is generally danced at romantic occasions. The dance is performed by young men and women.

The Shuna Kayang dance is danced in most of the villages and its rhythm combines both slow and fast movements. This represents scenes from the life in the village and the forests.

The Keekali dance form is a dance of young girls. The girls hold each other’s hand crosswise and rotate swiftly on their toes.

The Bhangra is a male dance which was originated in the Punjab and is also performed in some areas of Una.

The tribal dance forms of the trans Himalayan region differs a lot in content and music. The old tradition of both song and dance in these regions has been enthusiastically guarded against urban influence. Kinnaur, Lahaul and Spiti and Tehsils of Pangi and Bharmour of Chamba constitute this zone. The inhabitants in these regions are known as Kinnauras, Lahaulas, Spitians, Pangwals and Gaddis. Gujjars and many of these tribes have their own distinct traditions of folk dances, songs, dresses and ornaments.

In addition to the popular dances like Kayang, Bakayang and Banyangchu there are many ritual dances performed by Lamas on numerous religious festive occasions. One masked dance form mainly features an important event in the history of Himalayan Buddhism when Lamas effectively carried out a plan of executing a king namely Langdarma. A special event for masked dances is the celebration of the birth of Padma Sambhava (who carried the message of Buddhism to Tibet.)