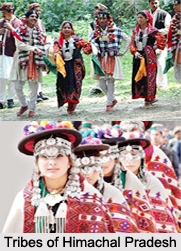 PVTGs, currently including 75 tribal groups, have been identified as such on the basis of the following criteria:

As currently there is no tribal group of Himachal Pradesh included in PVTGs.

Detailed Explation of Some Major Tribes of HP are as Following

The tribal communities residing in different parts of Himachal Pradesh are sociable and by their own culture and tradition, they have marked their position in the Indian subcontinent. Dancing, musical melodies, festivals, fairs etc. bore evidence to it. They are by nature nomadic people and their customs and social structure make them identifiable from each other.

The tribes of Himachal Pradesh belong to the famous Indo-Aryan family group. The major tribes of this region include Kinnaura Tribe, Lahaule Tribe, Gaddi Tribe and Gujjar Tribe.