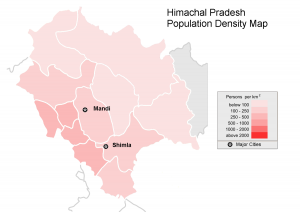 Religious Composition of population of State

The Growth rate of Hindus, Muslims and Christian is expected to fall more in upcoming 2021 census while other religions like Sikhism, Jainism and Buddism are expected to remain stable for next 2 decades considering already slowed down growth rate of these religions.

India is home to 4.5 lakh houseless families which has total population of 17.73 Lakh living without any support roof cover. The highest being living in state of Uttar Pradesh and Maharashtra. The Sex Ratio of houseless population of India is just 694 females per 1000 Males. Total 2.7 lakh children with age 0-6 are also houseless in India as per primary census data of 2011. Literacy rate of houseless people is 56.07% lower than national average of 74.04%.

Creating jobs for social and economic development of the youth has been given foremost importance by the Himachal government.

While the educated and skilled youth are getting absorbed in the local industries, a need-based training is being given to those people who are shifting from agriculture to other sources of livelihood.

As per the latest estimates, 30.05% of the total population of the state is classified as main workers, 21.81% marginal workers and the rest 48.15% are non-workers.

Men’s employment rates are similar to the rest of the country, but the bigger success story is in women’s employment. In 2011–12, about 63 percent of rural women in the state reported themselves as being employed. Himachal Pradesh  ranks second in female labor force participation in the country, after Sikkim, and significantly above the all-India average of 27 percent.

Poverty Rate in the State

One of the main achievements of Himachal Pradesh was its success in raising people out of poverty. Between 1993–94 and 2011, there was a fourfold drop in poverty in the state. Rural poverty, where 90 percent of its population lives, declined from 36.8 percent to 8.5 percent. The overall poverty decline benefitted all social groups across rural and urban areas.