Himachal is one of the most dynamic hill states of India with significantly high indicators of human development. Its natural resources and physiography, separate administrative identity, and notable accomplishments in literacy hold the promise of great progress.

The socio-economic base of the state at the time of its formation and even earlier has a bearing on the level of its development. Like other hill areas, it has been neglected in the past because of its peripheral location. Himachal Pradesh started with a weak economic and institutional base and a low level of human skills essential for modern development. 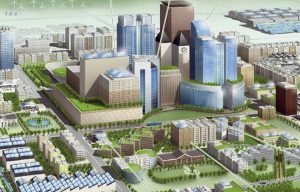 Himachal Pradesh of today can best be understood in the context of the socio-cultural and economic progress it has made in the past four decades. Social development of Himachal Pradesh is both a precondition and a component of planned development. No other state in the country except the hilly region can provide perfect model of development for Himachal. A long term understanding with other state in the region for a common programme of development can accelerate the pace of its development. Areas like forests, hydel power and tourism plays a significant role in the development process. Other possible area can water, market and roads. HP can take advantage of the advanced educational, technological and medical facilities of the neighbouring states, to uplift and upgrade its own.

Himachal Pradesh now is one of the eleven special category states, eligible for special central assistance. Starting with a growth rate lower than that of the national economy and Punjab and Haryana, the state reversed this trend during the nineties. The per capita income too has been consistently rising in the nineties. A structural change was experienced with a significant decline in the share of the primary sector and a rise in that of the secondary and tertiary sectors. The percentage of population below the poverty line declined to well below the national average. The thrust of planning has gradually shifted from agriculture and transport to social services, with power generation receiving prime attention. A drastic decline in development expenditure in the state in recent years is highly disturbing. At the same time, spatial equity is being generated by a reduction in the income level and literacy. Regional disparity in industrial development, however, calls for correction. The major challenge before the state is to deploy its human resources effectively for economic development, employment generation and the well-being of its people.

Given the large expanse of snow-covered, uninhabitable mountains, considerable forest cover and permanent pastures and grassland, along with the remaining small area under settlement, roads, water reservoirs and so on, the state is left only with a tiny share of land per person, if distributed equally. Hardly 10 per cent of the total area is cultivated; 26 per cent is under forests; and pastures and grassland account for 24 per cent. Himachal Pradesh can be divided into three broad regions on the basis of land use:

Himachal Pradesh is rich in water resources, with perennial rivers receiving water from snow-capped mountains. The major rivers flow into the Indus basin, except the Yamuna, which flows into the Ganga System. The seasonal concentration of rainfall makes irrigation in Himachal Pradesh essential, but hardly one-fifth of the cultivated land is irrigated largely because of physiographic constraints. The major rivers and their tributaries from a virtually unlimited hydel power potential. Seasonal fluctuations in the discharge of water, however, necessitate construction of big reservoirs. Only one-fifth of the state’s hydel-power potential has so far been harnessed. Efforts are on to make bigger use of widespread because of the numerous rivers and streams.

According to preliminary investigation of the geological survey of India, salt, gypsum, limestone, barytes, clays, mica, iron pyrites, slate and lead are the major minerals of Himachal Pradesh. The geological wing in the state’s Directorate of Industries is actively engaged in mineral prospecting of the state, the geological wing must be strengthened for a complete survey of actual availability; fuel and transport links to connect mineral rich sites have to be established; mining and quarrying need attention to minimise irreparable damage to the environment; and greater care must be taken when mining and dumping waste so that the problems of soil erosion and induced landslide are not aggravated.

Himachal Pradesh cannot compromise on its environmental and ecological status which must be protected. Development in this regard has to be designed in co-operation with other states of the region for mutual benefit. Himachal Pradesh should try to compete with the agriculturally and industrially developed states of the region, nor allow itself to be the victim of competition from them. On the contrary, entrepreneurs and other stakeholders should look upon Himachal Pradesh as a source of energy. A long term perspective of interdependence, institutionalised with the neighbouring states, would strengthen mutual planning for holistic development. The overall role of the central agencies, particularly the Nitiaagyog, would however be decisive in realising the full potential of each neighbouring state. This would go a long way towards the improving the financial and administrative health of Himachal Pradesh.

The tourism policy of Himachal recognises the endless possibilities of its development as an important labour-intensive sector, capable of making a larger contribution to the state’s domestic product. It has identified important areas of action for expanding the scope of tourism, breaking seasonal and destination barriers. It favours the entry of the private sector, alongside the HPTDC. Unfortunately, the follow up of the policy is inadequate and demands development of new tourist attractions, change in the land policy to encourage tourism entrepreneurship and aggressive marketing and advertising policies in this regard. It also calls for early action to market the wider scope of tourism, location wise and for all seasons, and to improve the quality of the  services at every level of contact with the tourist.