An Introduction to Himachal Pradesh Economy

The era of planning started in Himachal in 1948 along with the rest of India. The first five year plan allocated Rs.5.27 crore to Himachal. More than 50% of this expenditure was incurred on road construction since it was felt that without proper transport facilities, the process of planning and development could not be carried to the people, who mostly lived an isolated existence in faraway areas. Efforts were also made to involve people more in the process of economic and social advancement.

The community development programme launched in 1952, in certain selected areas of Himachal was later extended to the entire rural area. New ideas and forming techniques suitable to different areas and climatic zones were introduced bringing a new awareness amongst the people about the production possibilities of their respective lands which for centuries were using the ancient time worn methods. In Mandi and Kangra districts package programmes were undertaken in

Collaboration with the West German government for popularising modern techniques of cultivation among the farmers. Suitable agricultural machinery and good breeds of cattle, sheep and poultry were introduced in these areas. Well-equipped soil testing laboratories, dairy farms and agricultural workshops were established at various centres, besides an Agriculture University at Palampur.

Himachal is one of the classic examples of rapid transformation from the worst form of feudalism to democracy and from the most backward part of the country to one of its most advanced states. Himachal now ranks fourth in respect of per capita income among the states of the Indian Union.

Himachal has an impressive record to look back upon and there are wide opening vistas ahead. Its education system is well established, its agriculture reaching near self-sufficiency, its horticulture making a name in the country and even abroad, its road system having emerged as the best in the hills, the infrastructure for its industrial development well laid out, its rich forests being augmented and above all, the increasing attention of the nation towards exploiting its hydel resources are the guarantees for its bright future. It has already become the ideal in respect of development for the hill areas of the country.

There is huge regional disparity within the state.Himachal Pradesh can broadly be divided into two distinctregions based on geo-morphological and climatic features.One is characterized by high mountains and is called the‘High Mountain Horse Shoe (HMHS)’ region and itcomprises seven districts. The second region has plains,wide valleys and low hills, and is known as the ‘Low Hillsand Plains (LHP)’ region, and it comprises five districts. In terms of development the LHP region is well ahead of the HMHS region because of its close proximity to the relatively developed parts of Punjab and Haryana. Most food grain production and industrial output comes from the LHP districts (Himachal Pradesh Human Development Report 2002).

The economy of Himachal Pradesh is mainly dependent on tourism and apples. The state also has some natural minerals. It has two large cement factories, which not only caters to the people of Himachal but also sell their output to other states. Another major part of the Himachal economy is hydroelectricity due to the abundance of perennial rivers. In spite of considerable challenge, the state has good connectivity through road, rail and air. Besides having the highest road density among all the hill states of India, it also has three airports and two narrow gauge rail tracks. The rapid developments in infrastructure by government and promotion of modern techniques of cultivation among the farmers, suitable agricultural machinery and good breeds of cattle, sheep and poultry made Himachal as one of the classic examples of rapid transformation from the most backward part of the country to one of its most advanced states. Himachal now ranks fourth in respect of per capita income among the states of the Indian Union.

Himachal Pradesh is one state that has transformed itself from being the most backward state to one of the most advanced states in the country.

Around 50 percent of the economy of the state comes from agriculture, which is also the primary source of income as well as employment among the inhabitants. Rice, wheat, barley and maize are a few crops that are mainly grown all across the state. Being situated in the lap of the Himalayas, Himachal has been blessed with acres of fertile lands suitable for the cultivation of fruits, which is a boon for the state. Apple is one of the fruits whose cultivation earns around Rs 300 crore for the state annually. Other fruits that can be cultivated here are figs, olives, hops, nuts, mushrooms, saffron and sarda melons. Ancillary Horticulture produces honey, and flowers for the state as well. Tourism is also a source of income for the localities which adds much to the economic growth of the state. The abundant availability of electricity has encouraged the establishment of several small scale industries. The pollution-free climate of the state has helped to develop several electronic complexes in the state which is also a reason why rapid economic growth of the state has become a reality today.

PROGRESS OF THE ECONOMY:

Himachal Pradesh has emerged a leader in Hill Area Development. Himachal is an ideal destination for investment in Power and Tourism sector. Responsive administration and conductive macro-economic conditions have induced a competitive environment in the economy of Himachal Pradesh. 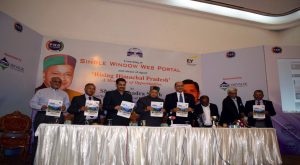 The economic growth in the State is predominantly governed by agriculture and its allied activity which has witnessed not much fluctuation during nineties as the growth rate remained more or less stable.

The declining share of agriculture sector do not, however, affect the importance of this sector in the State economic growth still is being determined by the trend in agriculture and horticulture production. It is the major contributor to the total domestic product and has overall impact. Due to lack of irrigation facilities our agricultural production to a large extent still depends on timely rainfall and weather conditions. High priority has been accorded to this sector the Govt.

The State has made significant progress in the development of Horticulture. The topographical variations and altitudinal differences coupled with fertile, deep and well drained soils favour the cultivation of temperate to sub-tropical fruits. The region is also suitable for cultivation of ancillary horticultural produce like flowers, mushroom, honey and hops.

The sectoral analysis reveals that during 2012-13, the percentage contribution of Primary sectors to total G.S.D.P. of the State is 19.72 percent, Secondary Sector 38.35 percent, followed by Community and Personal Services 18.46 percent, Transport, Communications and Trade 15.17 per cent and Finance and Real Estate 8.30 per cent.

Agriculture is the mainstay of Himachal Pradesh’s economy. About 81.5% of the total cultivated area in the state is rainfed. Rice Wheat and Maize are important cereal crops of the State.Agriculture and its allied activities is the main source of income of the state of Himachal Pradesh as it contributes around 15 % of the total GSDP and it provides direct employment to 68.44% of the total workers of the state. Agriculture Production in the state is largely dependent on timely rainfall. It is observed that the State has some quantity of maize surplus which could be put to industrial use such as manufacturing of cattle feed. Poultry feed cornflakes etc. Considerable quantity of potatoes and some quantity of ginger and tomatoes are also surplus in the state and are sent to other States. These can also be used to produce potato chips, dry ginger, ginger powder, tomato sauces etc.

During 2011-12 total area under fruits was 2,14,574 hectares, Apple, Mango, Plum, Pear, Peach, Apricot, Almond, Walnut, Orange, K-lime, Litichi, Guava and Aonala are popular fruits grown in the State. Production of fruits was 5,40,775 tonnes during the same period. A small quantity of fruits is processed in Himachal Pradesh and a major portion is sold afresh.

Apple is the main fruit crop of the state which constitutes more than 76% of the total fruit production and around 48% of the total fruit area. The reason for increase in area under major fruits may be that the farmers in the low hilly areas of the State have converted their land for cultivation of ancillary horticulture produce like flowers, mushroom and honey etc. However, like agriculture, horticulture production is largely dependent on climatic conditions. Hence, it may be observed that if the climatic conditions become favorable for growing of fruits tothe extent of its maximum potential, there is possibility of having more surplus fruits for industrial purpose. Units which could be setup on the basis of fruits available in the State are fruit processing like Jam, jelly, Juice, squash, fruit pulp, pickles etc.

These forests contribute to the State economy by way of providing timber, fuel, Ayurvedic medicine, herbs, resins, fodder etc. The said forest produce also act as resource to set up industries in the State. Based on these resources a considerable number of units have been set up in the state. There is still huge scope to utilize the forest waste which is available in the form of Deodar, Kail, Chil, fir/spruce, Sal, Ban Oak, Mohru, Kharsy-oak, Mapple, Hrsechestnut, Walnut, Bird-cherry & other BL Species etc.

Himachal Pradesh is blessed with mineral wealth. As per Geological survey of India, there are deposits of Lime stone, iron ore, rock salt, slate, gypsum antimony and lead etc in the state. The distribution of these minerals is scattered all over the state and includes lime stone in Bilaspur , Sirmour and Kangra districts; salt and slates in Mandi district; gypsum in Sirmour and Lahaul&Spiti Districts: barite in Sirmaur. In addition to its deposits of natural gas, petroleum and uranium are also expected in some parts of the state. But so far there is no comprehensive survey of their exact location and quantum of deposits except for very few minerals.

Tourism in HP has been recognized as one of the most important sectors of the economy. It is being realized as a major engine of growth for future. Himachal Pradesh is endowed with all the basic resources necessary for thriving tourism activity, geographical and cultural diversity, clean monuments and the friendly and hospitable people.

Tourism Industry in Himachal Pradesh has been given very high priority and the Govt. has developed an appropriate infrastructure for its development which includes provision of public utility services, roads, communication, network, airport, transport, facilities of water supply and civic amenities etc.

The department has a proposal for setting up of seven ropeways in Bhuntar to BijliMahadev (Kullu), Palchan to Rohtang (Manali), Neugal (Palampur), Shahtalai to Deotsidh (Bilaspur), Khayara to Triund (Kangra), Anadpur Sahib to Naina Devi (Bilaspur) & Jai to AdiHimaniChamunda (Kangra) location in the State under PPP mode on Build, Operate & Transfer basis.