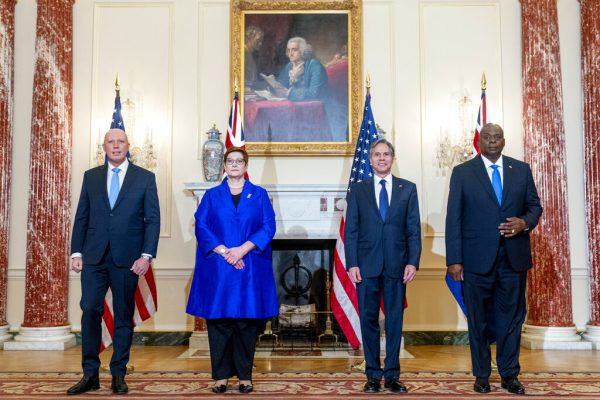 . When the defense arrangement between the United States, Australia, and the United Kingdom (UK), known as AUKUS, was announced last month, Indian Foreign Secretary Harsh Vardhan Shringla said the deal was “neither relevant to the Quad, nor will it have any impact on its functioning.” The statement, made just before Indian Prime Minister Narendra Modi was to visit the United States for the first in-person Quad summit, was an attempt to downplay the significance of AUKUS for India and forestall any distractions from the summit.

Yet, for India, the new defense agreement is inextricably tied to its own participation in and strategic calculations vis-à-vis the Quad. In particular, AUKUS highlights some of the dilemmas that India faces with regard to the Quad: whether to share or pass the burden to contain China in the Indo-Pacific and whether to commit to even greater reliance on the United States as its defense partner.

The earliest seeds of the Quad grouping were sown in 2004, when the United States, Australia, India, and Japan came together to provide humanitarian assistance after the devastating Indian Ocean earthquake and tsunami. In 2006, Indian Prime Minister Manmohan Singh and his Japanese counterpart, Shinzo Abe, noted in a joint statement that “India, Japan, and other like-minded countries in the Asia-Pacific” needed to cooperate on mutual interests. By 2007, Abe had made one of the earliest references to the Indo-Pacific as a strategic space by talking of “the dynamic coupling” of the Indian and Pacific Oceans and “the confluence of the two seas.”