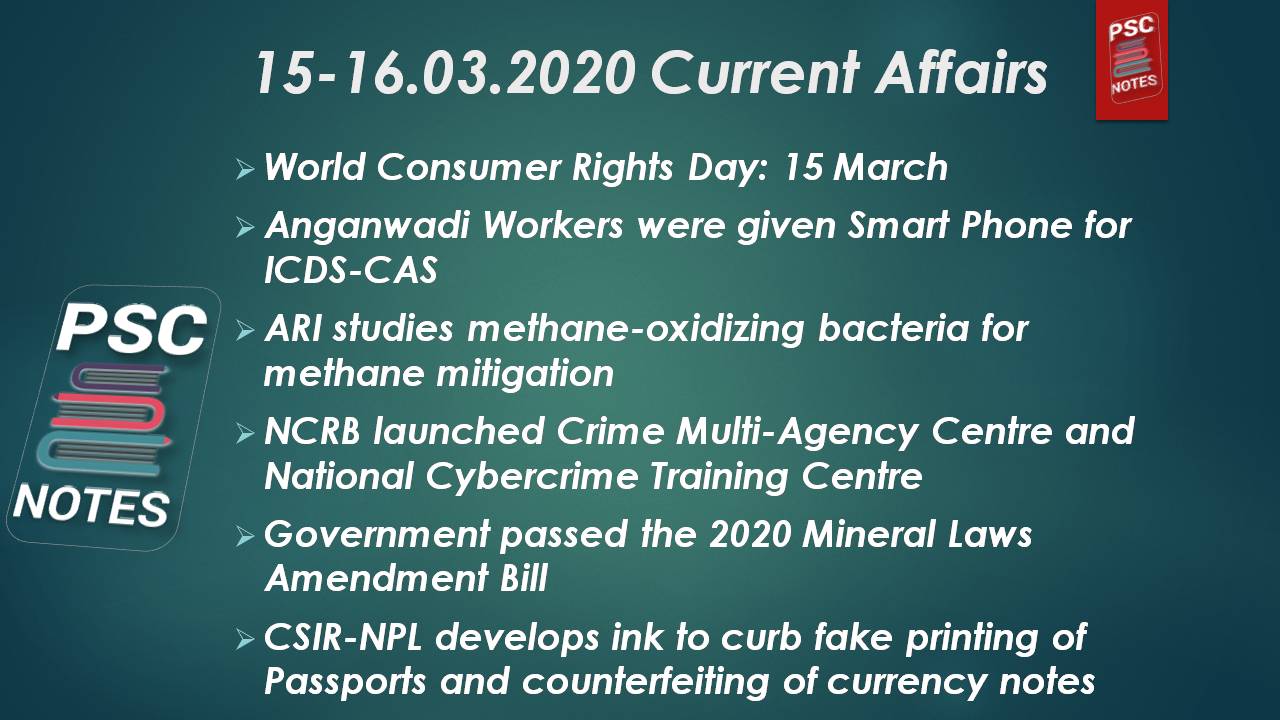 After withdrawing the Cabinet decision to reduce liquor price to curb its smuggling from neighbouring states, the BJP government in Himachal Pradesh will make liquor costlier from the next financial year.

The cabinet also approved renewal of retail excise vends in the state for 2020-21 to enhance government revenue, reduce liquor price and curb its smuggling from neighbouring states.

World Consumer Rights Day is celebrated on the 15th of March every year to raise global awareness about consumer rights and needs.

Celebrating the day is a chance to demand that the rights of all consumers are respected and protected and to protest against market abuses and social injustices which undermine those rights.

Government has taken various steps to protect the rights of the consumers and early redressal of their grievances.

Anganwadi Workers were given Smart Phone for ICDS-CAS

As of 29 February 2020, more than 6.25 lakh Anganwadi Workers across 28 States/UTs are using the application for service delivery.

Due to the delay in the procurement of smartphones by the States, some states have not yet provided the smartphones to the Anganwadi Workers.

Scientists at Agharkar Research Institute (ARI), Pune have isolated 45 different strains of methanotrophic bacteria. These bacteria have been found to be capable of reducing methane emissions from rice plants.

Methanotrophs can effectively reduce the emission of methane.

In rice fields, the bacteria are active near the roots or soil-water interfaces.

ARI Scientist has enriched, isolated, and cultivated the 45 different strains of methanotrophs and created the first indigenous methanotroph culture.

Medals were given to officers for meritorious service and other awards.

Cri-MAC was launched for sharing of information on crime and other issues related to inter-state coordination.

Also, NCTC was launched for professional quality e-Learning services on cybercrime investigation on a large scale to police officers, judges, prosecutors, and other stakeholders.

Parliament passed the Mineral Laws (Amendment) Bill, 2020, on 12 March. The Bill will replace the ordinance passed for the amendment of the Mines & Mineral (Development and Regulation) Act 1957 and the Coal Mines (Special Provisions) Act, 2015.

The Mineral Laws (Amendment) Bill will promote Ease of Doing Business and take the coal & mining sector into a new level.

The Bill aims to transform the mining sector in India and boost coal production and reducing dependence on imports.

The law will increase participation in coal/lignite block auctions and facilitate the implementation of Foreign Direct Investment (FDI) policy in the coal sector.

It also allows prospecting licence-cum-mining lease (PL-cum-ML) for coal/lignite. It increases the availability of coal and lignite blocks, and varying grades of coal blocks in a wide geographical distribution will be available for allocation.

Council of Scientific & Industrial Research (CSIR)-National Physical Laboratory (NPL), along with the Academy of Scientific and Innovative Research, Ghaziabad has developed a bi-luminescent security ink.

The ink appears white in normal light. But the ink glows in red and green colours when illuminated by two different excitation sources at 254 nanometers (nm) and 365 nm, respectively.