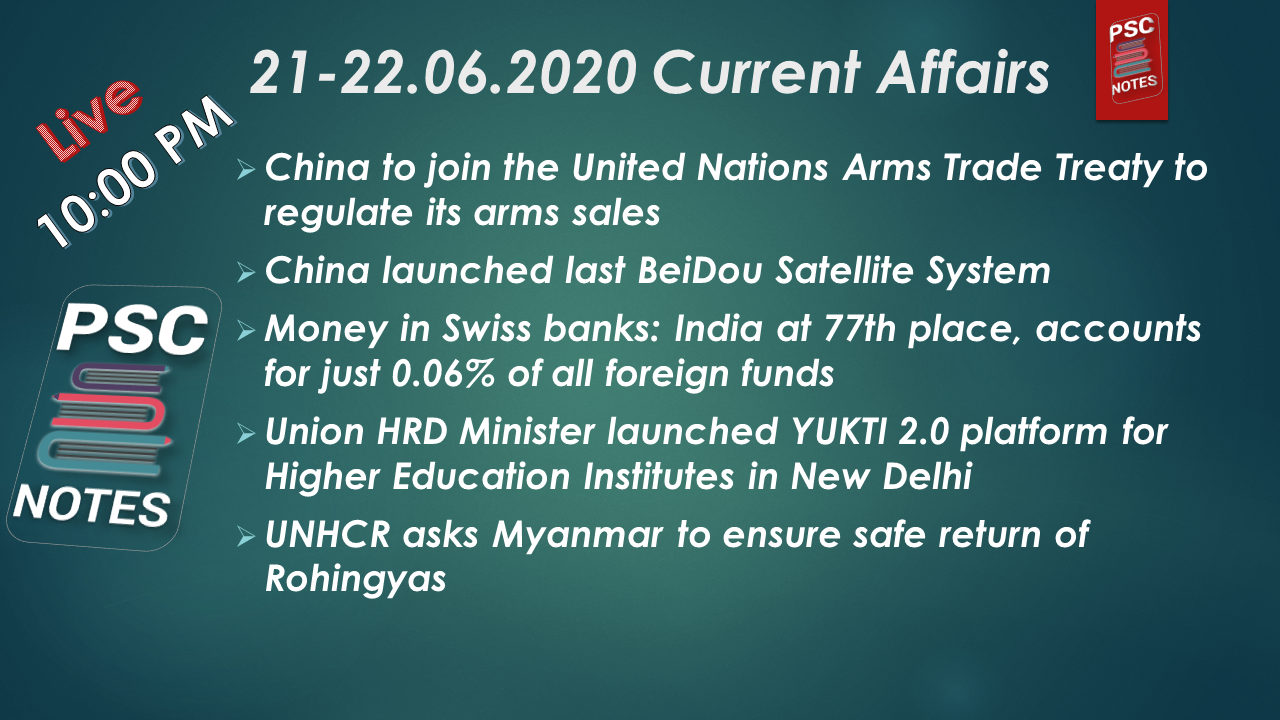 The Himachal Pradesh Panchayati Raj department has won a first prize under the E-Panchayat Puraskars-2020 to be given by the Union Ministry of Panchayati Raj.

All 3,226 panchayats in the state have been provided with internet facility, now with the help of it, people can access various services online.

Various services such as family register, registration of birth, death and marriages are registered online in the panchayats.

China announced that it has decided to join the United Nations Arms Trade Treaty (UN-ATT) to regulate its arms sales.

China has always strictly controlled the export of military products.

China’s move to join the treaty is an important step towards the country’s effort to enhance & maintain peace and stability across the globe and support multilateralism.

BDS-3 Satellite was carried by a Long March-3B carrier rocket.

It is the 30th BDS-3 satellite and also the 55th of the whole BeiDou satellite family.

BDS-3 will offer its users services including high-precision positioning and short message communication. It will bring new highlights to global navigation satellite systems.

The final BDS satellite weighs over 10,000 pounds. It is the largest of its kind in the family.

Money in Swiss banks: India at 77th place, accounts for just 0.06% of all foreign funds

India has moved down three places to 77th rank in terms of money parked by its citizens and enterprises with Swiss banks at the end of 2019.

The UK has retained its top position, as per the latest data from Switzerland’s central bank.

India was ranked 74th in the previous year.

It accounts for just about 0.06 per cent of the aggregate funds parked by all foreign clients of Switzerland-based banks.

In comparison, the top-ranked UK accounted for close to 27 per cent of the total foreign funds parked with Swiss banks at the end of 2019.

The top-15 countries account for nearly 75 percent of all foreign money in Swiss banks, while the contribution of the top-30 is almost 90 per cent.

YUKTI 2.0 is the logical extension of the earlier version of ‘YUKTI’.

The initiative aims to identify ideas relevant to the COVID-19 pandemic.

YUKTI 2.0 will help in fostering the culture of innovation and entrepreneurship in the academic institutions.

The initiative is expected to help the government to identify bottlenecks and formulate appropriate policies to strengthen the innovation ecosystem in the country.

It will also support creative innovations and technologies to help the society at large.

YUKTI was launched on 11 April 2020 by the Ministry of Human Resource Development (MHRD) to cover the different dimensions of COVID-19 challenges in a very holistic and comprehensive way. It was launched with an aim to ensure that students, teachers, and researchers in higher educational institutions are getting appropriate support to meet the requirements needed to advance their technologies and innovations. The outcomes of the earlier version of ‘YUKTI’ will be released soon by MHRD.

The United Nations High Commissioner for Refugees (UNHCR) has adopted a resolution calling upon Myanmar to create conditions for the voluntary, safe, dignified and sustainable return of Rohingyas and all forcibly displaced persons.

Adopting the resolution, UNHCR also stressed the need to address the root cause of human rights violations and abuses against ethnic minorities like Rohingyas in the Rakhine state of Myanmar.

The UNHCR called upon the Myanmar government to allow media, independent observers and diplomatic corps full access to the country.

It also urged the government of Myanmar to lift the internet shutdown imposed in Rakhine state.