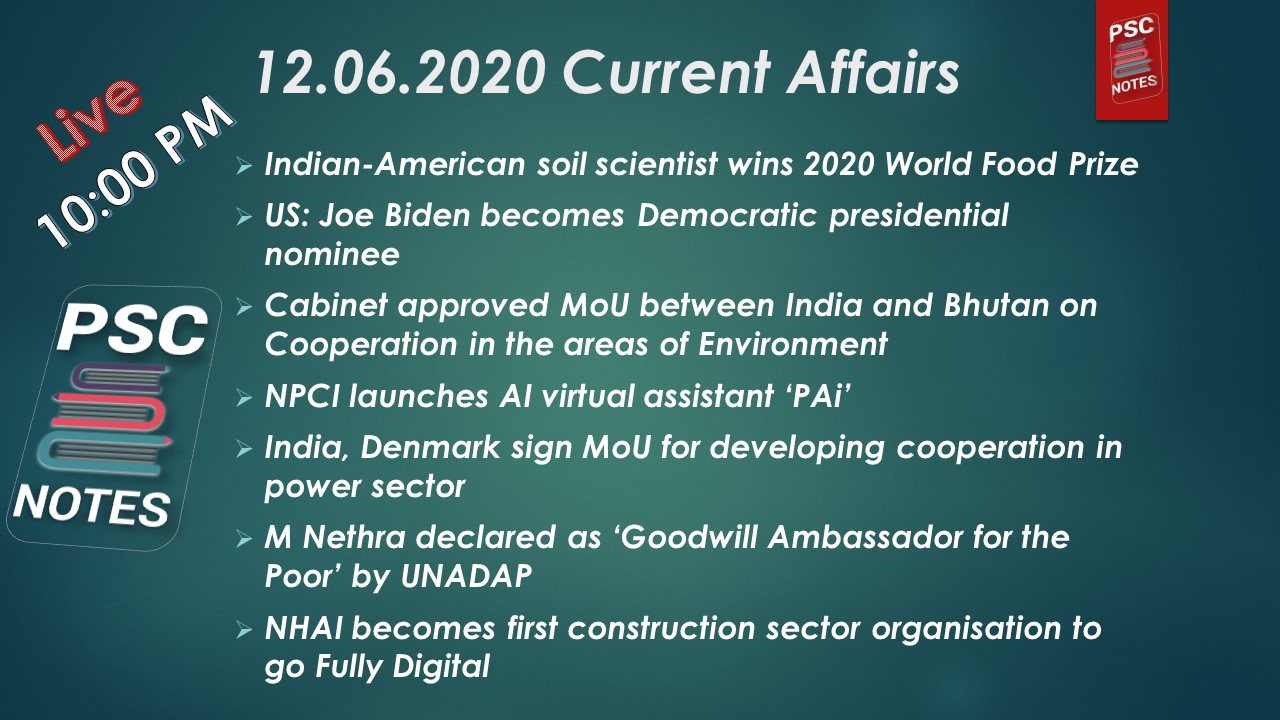 Under this parks and gardens would be developed in every development block with necessary facilities.

The main objective of this Yojna, which is being taken up in link up with MNREGA scheme, is to provide opportunity to the elderly people to spend their leisure time strolling in these parks and gardens.

The Ayurvedic and medicinal plants would be grown there besides providing recreational equipment, walking tracks and other basic amenities for elderly people.

During the current financial year as many as 100 such parks would be developed in different parts of the State.

Indian-American soil scientist Dr. Rattan Lal has won the prestigious 2020 World Food Prize, which is considered to be equivalent to a Nobel Prize in the field of agriculture. The award recognized his contribution to increasing the global food supply by helping small farmers improve the health of the soil. The award also highlights the importance of managing & restoring soil health.

Dr.Rattan Lal was awarded for his role in developing and mainstreaming a soil-centric approach to increase food production that restores and conserves natural resources and mitigates climate change.

Dr. Rattan Lal has a career spanning more than five decades. He has promoted innovative soil-saving techniques benefiting the livelihoods of more than 500 million small farmers.

Former US Vice President Joe Biden, has formally become the Democratic presidential nominee to run for the White House against President Donald Trump in the elections in November this year.

Biden took his tally of pledged delegates over the halfway mark of 1,991 from a total of 3,979, becoming eligible to earn the Democratic Party’s presidential nomination.

The veteran Democrat served as the 47th vice president of the United States from 2009 to 2017 during the presidency of Barack Obama.

The Union Cabinet chaired by Prime Minister Narendra Modi approved the Memorandum of Understanding (MoU) signed between India and Bhutan. The agreement was signed to improve cooperation in the areas of the Environment.

MoU will enable and promote the closer and long-term cooperation between India and Bhutan in the field of environment protection and management of natural resources on the basis of equity, reciprocity, and mutual benefits.

Both the countries agreed mutually to set priorities in the following areas of the environment including Air, Waste, Chemical Management, Climate Change, any other areas jointly decided upon.

The chatbot has been created to spread awareness around its products like FASTag, RuPay, UPI, AePS on a real time basis.

This is yet another NPCI’s initiative to improve digital financial inclusion in India.

The AI virtual assistant, PAi is available round the clock helping users with access to accurate information on NPCI products.

Customers can ask their queries in English and Hindi, via text or voice on the websites of NPCI, RuPay, and UPI Chalega.

PAi is developed by Bengaluru based startup CoRover Private Limited.

India and Denmark have signed an MoU for developing cooperation in the power sector.

The MoU signed is to develop a strong, deep and long-term co-operation between two countries in the power sector on the basis of equality, reciprocity and mutual benefit.

It provides for collaboration in areas like offshore wind, long term energy planning, forecasting, flexibility in the grid, consolidation of grid codes to integrate and operate efficiently variable generation options, flexibility in the power purchase agreements and variability in renewable energy production.

Indian electricity market will benefit from this cooperation with Denmark.

Under the MoU, a Joint Working Group will also be established.

M Nethra declared as ‘Goodwill Ambassador for the Poor’ by UNADAP

In Tamil Nadu, 13-year old girl, M Nethra has been appointed as the ‘Goodwill Ambassador for the Poor’ by the United Nations Association for Development and Peace (UNADAP).

The UNADAP recognition brings to the girl the opportunity to address the upcoming Civil Society forums at the UN conferences in New York and Geneva.

The Dixon Scholarship has awarded Nethra a scholarship amount of Rs 1,00,000.

The 13-year old girl convinced her father C. Mohan to spend their savings of Rs 5 lakh and donate essential items to the poor during the lockdown.

The money had been saved for Nethra’s education and for her to pursue her goal of entering the civil service.

The National Highway Authority of India (NHAI) under the Ministry of Road Transport and Highways has announced that it has gone Fully Digital as it has launched a unique cloud-based and Artificial Intelligence (AI) powered Big Data Analytics platform ‘Data Lake and Project Management Software’.

NHAI’s entire project management workflow is transformed from manual to the online portal based.

Also, the complete project execution operations including ‘workflow with timelines’ and ‘alert mechanism’ have been configured.

Project documentation, contractual decisions, and approvals are processed through the portal only.

The Data Lake software, with advanced analytics, will forecast the delays, likely disputes, and will give advance alerts.

The system will facilitate in taking correct and timely decisions as the system is likely to predict the financial impacts of different alternatives based on the historical data and will reduce a lot of disputes.